I was sorry, but not surprised, to hear of the passing of Chyna when I woke up in the early hours of yesterday morning.

Joanie Laurer became famous in the World Wrestling Federation after debuting in 1997 as a female bodyguard to Triple H. 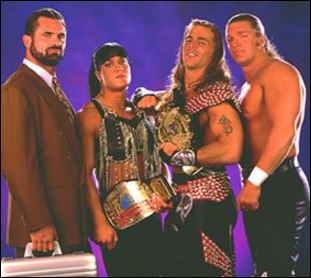 The pair went on to form D-Generation X along with Shawn Michaels later on that year.

As Shawn Michaels is my favourite wrestler of all time, I have very fond memories of her time in the faction.

Chyna went on to have an in-ring career as well. She was the first female to ever wrestle in the Royal Rumble, compete in the King of the Ring tournament, hold the WWE Intercontinental Championship and more.

I know wrestling is a storyline-led business. The company put her in a position to do what I wrote above and it evidently made an impression as they were some of the accomplishments that were a tribute to her in nearly every mainstream article I read yesterday.

And I sure did read a lot.

It seems that every time a popular star from either of the two huge eras in WWE history passes away I end up surprised at the coverage their passing receive. I felt the same yesterday.

Unfortunately, Laurer departed the WWF in 2001. A huge part of this was due to her and Triple H breaking up off-screen and him becoming romantically involved with Stephanie McMahon.

From that point on, her life spiraled out of control.

Then seemed to vanish.

She found her way back into the limelight some time last year. Her name was brought up on the 'Stone Cold' Steve Austin podcast where Triple H was a guest. Following her being one of the topics of conversation on the show, she re-emerged on social media.

Laurer had been living in Japan and working as a teacher. In my opinion, her becoming part of the public consciousness again was the beginning of the end. She made her way back to the USA and was even rumoured to have been in talks to be on the autumn 2015 edition of the UK Celebrity Big Brother.

She had also been trying hard to get herself back in good graces with WWE. In fact, it seemed a lot of her energy was spent stressing over an attempt to be inducted into the Hall of Fame for the last months of her life.

I can't help but wonder how her story would have ended had she just stayed hidden away in Japan. With that said, I cannot comment on how she was living over there. All I know is there was none of the controversial news reports about her. She was out of the public eye and seemed to be doing something that was keeping her demons at bay.

It seemed that way.

So, yes, like I noted above, her end is not surprising because her fall had been well documented for many years. This does not take away how sad it is.
Posted by David Taylor at 12:00 AM