And then there is Manning.

I had been anticipating this day to arrive for well over a year. It was only a matter of time when Peyton Manning called it a career.

A matter of time before I had no other sports star that were older than me. I guess it's a complex about getting old or something, but I cannot look at present sports stars and consider them a 'Hero'.

Manning was the last of the bunch.

I first got into American football back in the 1980s when Channel 4 had the games on over here in the UK. I then got into other things like the WWF and then spent my time following that. In 2004, I fell back in with the NFL after watching a few games over a course of a week and haven't looked back since.

In my early days following the sport, Washington was the team that was forced on me. I have pictures of me wearing a burgundy and gold pyjamas bearing the logo in a photo collection somewhere. There was also a brief period where I supported the Cincinnati Bengals.

In 2004, I had outgrown the PJs and was looking tor a new team. I found it on Thanksgiving Night of that year.

I cannot remember what the score was that night. However, I knew I was watching a great player in Peyton Manning. I instantly became a fan.

I was all-in from there. I watched the lows and the highs of the Colts' quest to win a Super Bowl with Manning as their leader. Sometimes these peaks and valleys took place in the very same game. One such occasion was the AFC Championship game during the 2006 season when the Colts had to come back from a heavy deficit to beat the New England Patriots. It wasn't until the final minute of the game that the Colts took the lead.

From there, they went on to win the Super Bowl.

Under Manning, the team made it to the big dance a few years later. This time falling to the New Orleans Saints.

It was the last time Manning would don the Indianapolis Colts colours at a Super Bowl. A few seasons after this loss, the quarterback went under the knife numerous times and the team's owners decided it was best to cut loose instead of paying a huge sum of money to a player they were unsure could come back and play as well as he had done in previous years. 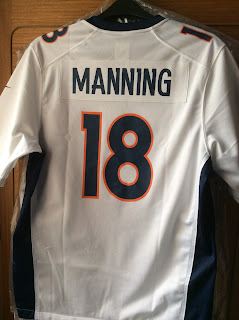 I watched the live press conference when Peyton Manning and Jim Irsay (Colts owner) announced that the former was leaving. I felt for the guy because he was very emotional. From there, it turned into a 'Where Will Peyton Manning Play Next?' show as he went from team-to-team to see where the best fit was for him.

He chose the Denver Broncos. I watched the press conference of his arrival then as well.

Ironically, I got to watch Manning play for the Broncos more than I ever did get to see him play for my favourite team. This was more to do with me signing up for NFL GamePass. I made every effort to watch the Broncos each week they played.

Of all the seasons watching Manning, the best - to me - was 2013. He kicked off the opening night of the season by throwing seven touchdown passes against the Baltimore Ravens, who had won the previous Super Bowl.

He won the Sportsman of the Year Award from Sports Illustrated magazine and booked his third ticket to the Super Bowl. 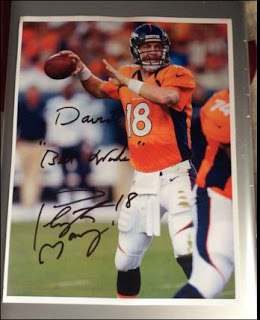 During the off-season, I received an envelope in the post from Denver, Colorado. It was a reply from a letter I had sent Manning in the latter part of the 2013. My letter had reached him. In it was mostly things I have already written in today's post. In return he sent me a signed coloured photograph. It instantly became one of the coolest things I have ever possessed.

Manning and the Broncos fell short in the play-offs of 2014. 2015 was a peculiar season as the quarterback was benched (minutes after breaking the NFL's passing record) and then left out of seven games with a foot injury. The team did okay in his absence. Then, in the final game of the regular season, he came off to assist the team to a win over San Diego. This victory scored the number one seed in the play-offs.

It was full steam ahead from there. The Broncos - and Manning - claimed the Vince Lombardi Trophy a month later.

One of the narratives of the Super Bowl run was the question about Manning and whether it was going to be his 'Last Rodeo'. He refused to confirm or deny his intention to retire all the way to and in the moment after the Broncos won Super Bowl 50.

Despite knowing in my gut that that was it, I did entertain the idea that Manning would be cut by Denver and then join up with the Los Angeles Rams for their first year back in California. This thought lasted two days. The reports that Manning had decided to retire for definite broke on Sunday.

I watched the press conference where Manning officially retired, on Monday evening. Just like back when the Colts and the player held an event to announce their split, I watched through misty eyes.

The NFL Network has tagged it 'The End Of An Era'. Can't argue with that.

I think it's only fitting that this post ends the same way Peyton Manning closed his talk with the reporters. He did it with one word. A word that meant so much to him and his team-mates yet lead to confusion to opponents, commentators, reporters and fans alike.