A few weeks ago, I published a post where I noted that my six-year old nephew had categorised the old Batman TV series as 'Old Skool Batman'.

I didn't know where he came up with the expression, but I thought it was cool.

The reason why I've returned to the subject is because - just the other day - I was looking through Twitter and the 'Deal of the Day' was for... 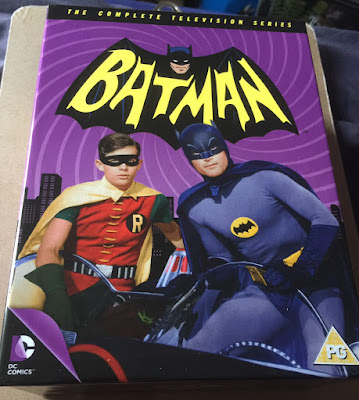 It was going for £27.99 on DVD or £35.99 on Blu-ray. I figured it would have been a nice thing to have in the home for when my nephew visits, so bought the DVD boxset. I couldn't justify paying extra for Blu-ray when the series was made in the 1960's, but that's a rant for another day.

It arrived on Saturday. I haven't really had a chance to watch any of the episodes yet. The plan is to go through them during the school holidays (Easter, May and Summer. I don't plan on doing them all in the next fortnight!).

There are 120 episodes and they're split up into boxes of seasons. There's a picture of these boxes below. 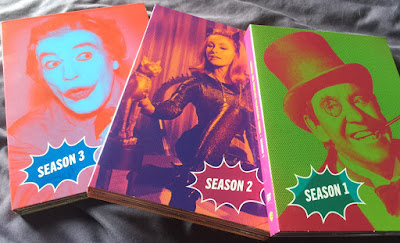 There are tons of discs and one thing I do not like at all is the way the discs are held inside these boxes. On each side, there are two discs put together without the holder (or whatever it's called) in the middle to hold them in place. So, they're held together with the edge of the case. They've done a poor job the packaging, in my opinion.

With that said, there 120 episodes of the show, a bonus disc with loads of special features and a booklet that acts as an episode guide.

Oh, and I am getting hassled by family members. They think I've bought this item mainly for myself. To be fair - they're half right! I still want to bring my nephew along for this ride because I am confident he'll enjoy them as well.
Posted by David Taylor at 9:00 AM