The Best Summer To Be A Pro Wrestling Fan

I have been on one of the biggest summer trips ever.

And I haven't really left the house. 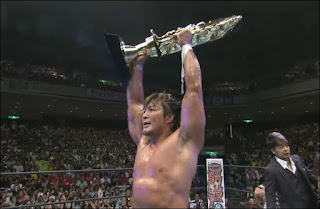 Since Monday July 20th, I have watched seventeen of the nineteen events live without a hitch at all through the NJPW World streaming service.

The two days I missed were caught up on almost immediately as I watched them on demand a couple of hours after the shows' conclusions.

I have been a fan of pro wrestling since the 1980s. I got into Japanese wrestling in the 1990s. I admit, I didn't keep up 100 percent with the Japanese companies as the only source to follow that genre of wrestling was through VHS tape trading, magazines and newsletters.

Then, with the Internet, I was able to watch clips of matches here and there. Never once did I see an event live on TV or through a computer screen.

I have certainly made up for it.

When I found out about NJPW World back in December of last year, I made a vow - a New Year's Resolution, if you will - that I would get back into Japanese wrestling in 2015. The plan all along was to start back up with the G1 as I didn't plan on having much to do over the summertime.

It has been the best summer as a wrestling fan. I have enjoyed every single minute becoming reacquainted with New Japan. They've got me locked in now. As of right now, I'm sticking around to see how things pan out all the way to Wrestle Kingdom X on January 4th next year.

This has been an amazing three weeks. I have loved waking up, eating breakfast, getting washed & dressed, going out to buy the newspaper and then heading back home to catch an event.

It was so much easier than staying up until four in the morning catching a WWE pay-per-view. Not that that's a bad thing.

Which now segues into this week.

SummerSlam is on Sunday. But - before that - WWE's feeder league, NXT will host its TakeOver: Brooklyn show the night before.

Have I told you this has been a great summer to be a wrestling fan?

Another fun-filled week is ahead. I hope!