I know I like having a dig at the writers on the Daily Mirror's website, but what I am going to share with you today blew me away. 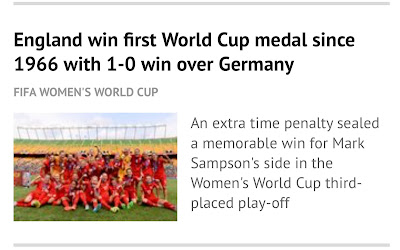 I don't know whether to laugh hysterically or bang my head against a wall. It's the most absurd thing I have seen on the website.

And that really should state a lot considering the typos and the lack of self-awareness on behalf of some of the writers.

For those that don't know what I am going on about, here's what has wound me up.

The England men's football (soccer) team won the FIFA World Cup in 1966 and haven't won it since so the English media seem to have this agenda where they cannot let go of this feat.

Every opportunity it gets, the writers bring up the '66 World Cup win.

Last night, during the Women's World Cup, England defeated Germany 1-0 in the game to work out the teams that finished 3rd and 4th in the tournament.

Stating that 'England win first World Cup medal since 1966' is so damn stupid. There's obviously two World Cups at play here - the mens' one that has been around since 1930s and the womens' one that dates back to 1991.

I don't want to take anything away from the women's win here. They deserve a lot of credit. It's just stupid patriotism bias to even refer to the other World Cup when discussing the female equivalent.

And you know what's even more worthy of a head shake right now? If the male team ever get at a third place position in a World Cup tournament, last night's victory by the women will all be forgotten. It'll be back to dusting down the old 'Since 1966' headline.

But that's a moot point for the time being at least. The men's England team isn't good enough compared to most of the other national sides in ANY tournament.

The women will bring home a current day World Cup long before the men ever will.