I was sorry to hear about the passing of Dusty Rhodes yesterday.

Rhodes, real name Virgil Runnels, was one of the most popular names in professional wrestling with a career both on and off screen that lasted well over fifty years. 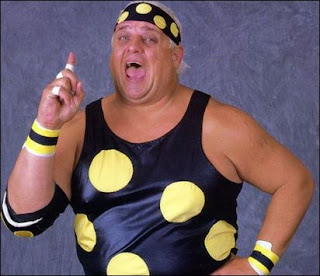 Rhodes was working for the WWF when I first got into American wrestling. He would come to the ring dressed in black and yellow polka dot ring gear with a valet named Sweet Sapphire.

As I grew up, my intrigue into the history of pro wrestling developed.

One of the things I learned was Rhodes was one of the biggest stars to come from the WWF's rival NWA/WCW. The polka dot gimmick was something Vince McMahon gave him to somehow make him less of a star and more of a character (trust me, I may not have articulated the sentence correctly, but there was a spite involved with how they used him).

The bottom line is he not only took up the gimmick, but he ran with it and scored. Yes, it was cheesy but he made it.

How can I prove this? Because everybody who followed WWF wrestling back then should easily remember it. There are countless other rubbish gimmicks out there that are long forgotten.

He was one of the most charismatic wrestlers ever. All you need to do is go and browse YouTube for some of his promos just to see how amazing he was.

That's all for now. Rest in peace, Dream.
Posted by David Taylor at 9:00 AM