The Day The WWF Came To Town

On October 26th, I wrote about it being twenty years to the day that World Championship Wrestling visited Cardiff Arena for the Halloween Havoc Tour. In the post, I noted how I had met Arn Anderson, Johnny B. Badd, Sting and Davey Boy Smith at the event.

A few weeks after that, the World Wrestling Federation made its first ever trip to Cardiff and I was there to meet them.

I've written about the experience countless times on this blog over the years but December 5th 1993, just like October 26th 1993, is one of the most memorable times I can recall as a wrestling fan.

On that day, I waited outside the hotel where the wrestlers were staying and managed to catch them as they were checking in.

I met the entire crew of people who worked the card that night. The best way to show just who I encountered that Sunday afternoon is by going through the results of the night: 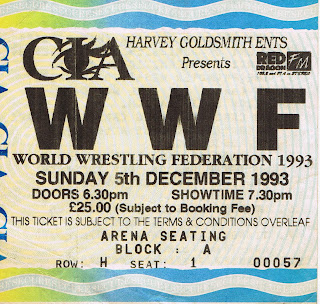 7) The Undertaker (with Paul Bearer as manager) beat Yokozuna (with Mr. Fuji as manager) via disqualification

Here are just a few of my personal memories from that day.

- Rick Martel being one of the first people to leave the bus but having trouble at reception. They kept him waiting and other people seemed to be jumping in front of him. Road agent, Chief Jay Strongbow asked him if he had checked in and Martel yelled 'F**k no, this place is bulls**t!'

- Asking Tatanka if he was planning on 'getting Ludvig Borga back' after the Finnish heel had been the first to pin the Native American wrestler a few weeks earlier.

- My pen running out as Adam Bomb was signing my WWF Superstars magazine.

- Having my picture taken with Razor Ramon who, at that time, was my favourite wrestler.

- Standing at the hotel desk talking to Virgil. He asked to have a look through the WWF Superstars magazine and, as he leafed through, he asked 'am I in here?' I knew he wasn't but felt I would let him down if I told him he wasn't so I responded with 'I'm not sure'. It then dawned on me that he would eventually realise he wasn't in so I tried distracting him as he was on the page featuring Mr. Hughes and asked - 'is Mr. Hughes still in the WWF?' He wasn't.

- Virgil also gave me rabbit ears when we had a photo taken later.

- Sharing a laugh with Randy Savage when I was walking down the street with him, Shawn Michaels, Ramon and the 123 Kid. A lady walked up to Savage and asked 'are you Randy Savage?' he responded by saying 'no, he is back down the road at the hotel' and then looked at me with a wink and a laugh.

- Having a photograph taken with Mr. Fuji but being too scared to ask Yokozuna for an autograph or picture.

- Shawn Michaels remembering me later that evening when I was at the show. He was standing near on top on the third turnbuckle as Randy Savage was coming down the aisle. He looked down and noticed me and gave an acknowledging nod in my direction.

- Paul Bearer saying 'Ohhhhh Yesssss!' to us in the hotel lobby whilst in a tracksuit. Seeing him out of his usual suit and doing his gimmick is still seems surreal after all these years.
Posted by David Taylor at 12:00 AM