With today's release of Man of Steel, I had planned on spending this past week watching the last five Superman movies with the intention of writing about them today.

I didn't get anywhere with this plan. So, what was I going to do to celebrate the return of Superman? 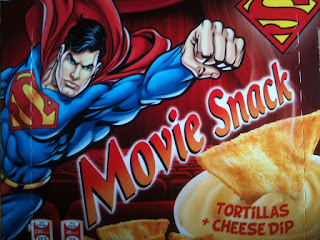 This time yesterday, I had no idea what I was going to write about. That was until I was in a well-known German supermarket that operates in this country. I saw a display with the Superman 'S' logo and curiosity got the better of me.

I decided there and then that today's post would involve me sampling this snack.

And before I continue, this was quite the task as I had made it a life goal of mine never to eat anything that needs to be cooked (or microwaved in this case) from this particular supermarket ever since I ate a chicken kiev that looked like it has been produced in Chernobyl a few years ago.

It was the worst thing I had ever eaten. Trust me, that is saying something.

I had done so well avoiding food from this particular shop. I guess this was my punishment for not sticking to my original plan 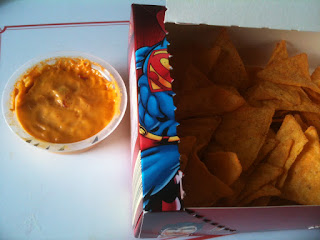 The final verdict is it was okay. I had low expectations going in so that more or less helped get the 'OK' from me.

With that said, I think it's safe to say I won't go out of my way to have them again.
Posted by David Taylor at 12:00 AM