Gareth Bale released a statement yesterday announcing that he was retiring from football. 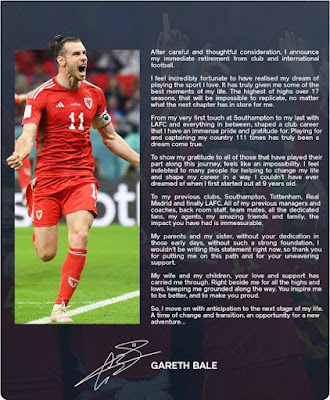 You know all that excitement I expressed when Wales had qualified for the 2022 World Cup last year? And the last couple of European Championships?

Bale was THE main contributor to Wales making it to those tournaments.

I will always remember how great this player was.

I was also fortunate to have Bale play for my favourite foreign football team - Real Madrid. Bale had so many great outings for those Real sides winning a plethora of trophies along the way.

Everyone is talking about Bale being the UK's best footballer since his retirement was announced. If he isn't, he's very close to number one.