I ended up having eleven wins and four losses in the regular season portion of the NFL fantasy football league I play in.

Finishing in second position, I now head to the playoffs and will meet the team which finished in third place while the league winner (who also went 11-4, but scored more points than me) squares off with the fourth-placed team. 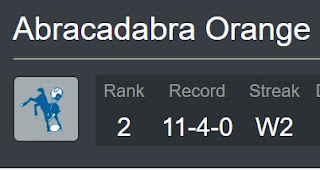 It's going to be a tough for me to get back-to-back victories in order to win the league's Super Bowl. This week's opponent, who finished 10-5, has a lot of good players. It would not surprise me if I fail in the semi-final let alone next weekend's final.