My mother gave me one of the new Fifty Pence pieces with King Charles III on it yesterday.

This is the first coin to be produced under the new King's reign and started going into circulation this month. 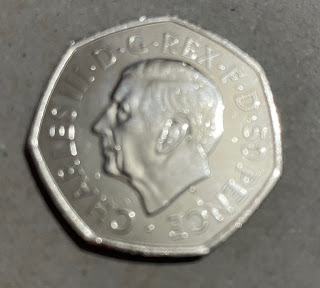 The picture didn't come out as well as I had hoped. However, this is the first picture I took of the first 50p with the new Monarch's head on it.

You'll notice that King Charles is facing in a different direction to the coins with his mother on them. This is because they alternate every time a new person is crowned. Therefore, when Charles is succeeded, the next King will be facing to the right of the coin just like Queen Elizabeth II.