By this time next week, the 2022 FIFA World Cup would have had its opening ceremony and the first game would have been played.
I still cannot shake off how weird it is to have the tournament held in November and December. But, more than that - I still cannot shake off the fact that Wales has qualified.
I've written the story many times on this blog. I first became a fan of football through the Panini sticker book of the Mexico World Cup of 1986. My interest in the game evolved from there.
1986 is where I seem to keep thinking about right now as the tournament nears. It would have been wonderful for my young self to have been able to collect stickers of the Welsh team and follow their journey to the Americas.
Or Italy in 1990, the USA in '94, France in 1998 and so on.
Now, all those years later, I am far too old to collect stickers. But, that doesn't mean I haven't got an album.
I received a free copy inside The Sun newspaper a few weeks ago and I couldn't help but open up the page for Wales as soon as the book was in my hands. 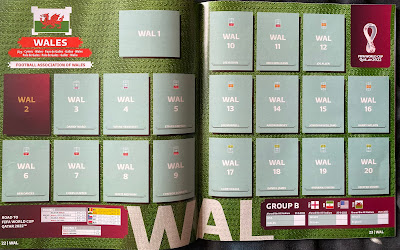 I've said it many times, but I'll repeat it again - I hope that there are Welsh children getting into the World Cup through the collecting of stickers. It was such a fun gateway to the sport for me. I could only imagine the experience would have been even more enjoyable than it already was had my country played a part all those years ago.
Posted by David Taylor at 8:31 AM