An episode from the season four of This Is Us has recently inspired me to accomplish a goal I had in my childhood.

In the popular US drama series, we see one of the main characters - Kevin (as a teenager) - hunting for a baseball trading card that he wanted for his collection.

Kevin and his mother eventually open a packet that contains the card and then, later in the episode, we see Kevin - now as his adult self - purchase another copy of the card from a specialist.

It was the year I suffered my initial bout of World Cup fever. The cause of this ailment was brought on by being exposed to a Panini football sticker album.

The '86 World Cup was hosted by Mexico. Its mascot was a sombrero-wearing jalapeno  named Pique.

And I mean everywhere.

Take for example Easter 1986. Back then, having a Kinder Surprise egg was a rarity for us kids. However, at Easter, we were always given a box containing three Kinder eggs.  Kinder had a World Cup promotion at that time and there were Pique figures, that you needed to put together yourself, inside some of the eggs.

Of the three eggs I had, Pique was in...

Bear in mind this isn't like Kinder Surprise eggs now where the promotion might have the same characters but in different poses. This was Pique and, once you had constructed the toy together, it was the same figure.

My sister had the same deal as me - three Kinder Surprises in the box. Yes, you guessed it. She also had three Piques inside her chocolates.

Even though Pique had a 6-0 run when it came to being a 'surprise' inside Kinder eggs at my home in 1986, his record in my opening of Panini Mexico '86 stickers was abysmal.

The third sticker in the collection was of Mexico's World Cup mascot on top of a shiny, foil background. I obviously cannot recall how many packets of stickers I bought that year. However, let's say I bought a lot.

And the shiny Pique sticker didn't appear in any of them.

I tried and tried, but the search turned into a lost cause. Whenever I've seen the character over the years, I've always thought back to the hunt for the third sticker in that collection.

To highlight just how much 'The Search for Pique' has been etched in my life story, how about this one? My first memory of junior school is - sort of - Pique sticker hunting related.

When my infant class visited the school to meet who would become our new teachers, I recall looking around the classroom and seeing a Mexico '86 sticker book left on one of the tables. I opened it to the first page and there was Pique in his silver-foiled glory.

It was the first - and only - time I saw Pique in a sticker book that was physically in front of me. All other books, my own and friends, were Piqueless.

Seeing Kevin finding the baseball card he wanted in This Is Us, not only as a child, but as an adult, made me wonder whether I should get Pique as an adult.

It called for a trip to eBay.

I saw Pique stickers available for all ranges of prices. The top price - from my initial visit - was £40.

I wanted Pique, but I wasn't willing to spend crazy money for one sticker even if it was to complete a goal I had set myself back in 1986.

A few days after first looking Pique up on eBay, I found myself back in the hunt. This time, a Pique shiny was going for an opening bid of 99p. It was 'used' and had apparently been pulled from a sticker book, but I thought it was good enough for me because all I wanted was to finally own one after thirty-four years.

I set my highest bid at £5. A couple of days later, £3.32 was enough to win the auction. Add to that the postage cost of eighty-eight pence and the full amount I spent on the sticker was £4.20. 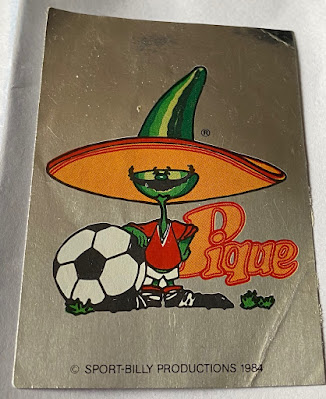 Yes, it has a wrinkle on it and I don't even know if I still have the sticker book to glue it in. However, I am glad I've finally got my hands on it.

With that said, I still believe that finding it inside a packet would have felt more rewarding considering how many packets I opened in an attempt to find Pique when I was a child.

While looking for the sticker, I came across many Pique Kinder toys. It made me wonder whether there might be somebody out there who spent a small fortune looking for Pique toys in Kinder eggs as a child and was now trawling though the auction site to finally get hold of one.

I quickly discounted that thought.

Hunting for Kinder Piques was far easier than looking for Panini Piques.
Posted by David Taylor at 12:00 AM