I woke up in the early hours of this morning and, as usual, I chose to have a browse through Twitter to see what was going on.

I have a lot to write about Coolio.

When I first started watching Yo MTV Raps, late on Saturday nights here in the UK during the close-to-mid-1990s, one of the first songs I recall viewing was 'I Remember' by Coolio.

I loved that song. It was all about his growing up. Back then, a lot of songs took the reminiscence route. For example, 'Back in the Day' by Ahmad was another regular on MTV.

I would play both those songs a lot on the VHS cassette I had recorded the MTV show to. 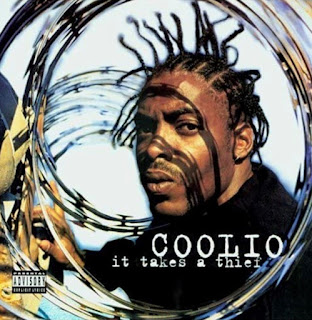 When Coolio's album - which had 'I Remember' on it - came out, a derelict building close to my home had a fly poster up on one of the boarded up windows. It was the first, and only!, time I had ever seen a rap music album advertised anywhere near me.

Rap wasn't as mainstream as it is today. To have 'It Takes a Thief' advertised like that, especially in my area, was quite big to my teenage eyes.

I wanted to pull that poster down to keep for myself, but decided against it knowing that I would likely tear the thing to shreds if I were to try.

A year later, Coolio became even more popular on these shores when his song - Gangsta's Paradise - reached number one in the charts.

The song was on the soundtrack of the Michelle Pfeiffer movie, Dangerous Minds, which came out around the same time.

Whenever I hear 'Gangsta's Paradise', memories of going to see Dangerous Minds - on a Friday night in January '96 with my group of friends - floods back to me.

I was heavily into rap music back then. The other four friends weren't. However, they became fans of Coolio because of Gangsta's Paradise. I am sure they weren't the only ones.

Considering the song spent weeks in the charts, it's a safe guess on my part.

The weird thing about learning of Coolio's death is that I had chosen to listen to some of his music earlier this week.

I don't know if it is the Lakeside version, or the Coolio cover, but Fantastic Voyage is currently appearing as a theme in a TV commercial here in the UK. I rarely watch commercials but - after hearing a few beats - I found my self humming and singing the Coolio version. Before taking a shower on Sunday or Monday morning, I opened up Apple Music and played Fantastic Voyage to have on in the background just because it had become a recent earworm.

From Fantastic Voyage, I landed on Gangsta's Paradise and then listened to 1,2,3,4 (Sumpin' New).

I'm going to listen to some more once I've finished this. I'll get to 'C U When U Get There' and another favourite which reminds me of my youth - 'Too Hot'.

Rest in peace, Coolio. I'll see you when I get there.