Mike Barnes Is Back!

Something I was hoping would happen in season five of Cobra Kai was confirmed last night. 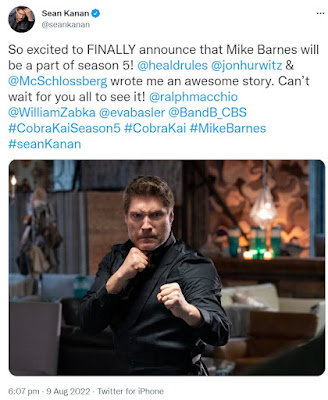 Sean Kanan, who played the cocky karate champion - Mike Barnes - in Karate Kid III, has confirmed that his character will be part of season five of the movies' spin-off series.
In my opinion, Mike Barnes was one of the missing pieces in a Cobra Kai jigsaw of Daniel LaRusso's antagonists from the film series.
Season one of Cobra Kai brought us Karate Kid I's Johnny Lawrence as one of the main characters, then it was his evil sensei - John Kreese - in season two (okay, well - he returned in the final scene of season one but he was a regular from season two onwards). The third season reintroduced Daniel's nemesis, Chozen, from Karate Kid II while the fourth season brought us Terry Silver; another villain from the third movie.
It seemed fitting that Mike Barnes would be next to return. And I am hyped up.
Season five of Cobra Kai will premiere on Netflix on September 9 2022.
Posted by David Taylor at 11:02 AM