I am a little over forty minutes removed from watching the final episode of Neighbours as I sit here at my computer with - other than the words I've just written - a blank screen.
How am I meant to write about what I've just watched with so little time before my intended 12AM BST cut-off to send the blog out live?
The finale was a fitting way to call time on Neighbours.
One of the things I wrote about, after finding out about the show's cancellation, was my concern about who would have the final words. I had argued it should have been Karl or Susan Kennedy because they had the longest tenure. The important monologue was performed by Susan (Jackie Woodburne). However, there was little-to-minor dialogue said by Scott Robinson (Jason Donovan) and Paul Robinson (Stefan Dennis) as the scenes started to close out.
It was fitting to see Stefan Dennis do the opening voiceover considering his character of Paul Robinson was there from episode one and was a major part of the series with a few-year gap  sandwiched inside his reign.
As for the episode itself, and in my humble opinion, the star - among the many stars who showed up to celebrate this closing special - was Guy Pearce.
Pearce's character of Mike Young, who left the soap in 1989, returned in the penultimate episode to set up the rekindling of his love for Jane Harris (Annie Jones) which played out in the finale.
Jane takes Mike on a trip through all of the houses in the cul-de-sac. In a way, I could see these brief scenes with Mike acting as the fans - both old and new - being shown around for one final time. 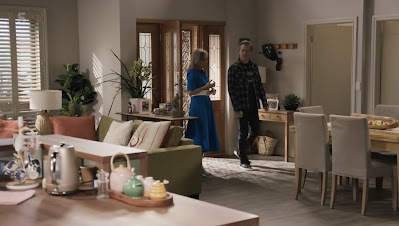 It was really cool to see Mike back at the home he shared with Des and Daphne Clarke. But, that wasn't all.
It was even cooler to see Guy Pearce once again share screen time with Paul Keane, who reprised his role as Des for the finale. 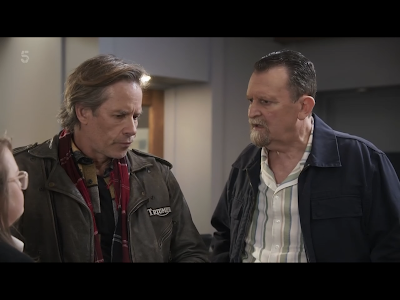 The most famous couple in the soap's history also made their appearance mid-way through the episode. 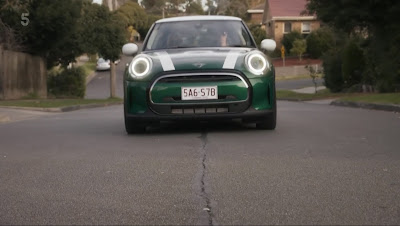 Scott and Charlene Robinson returned to Ramsay Street in a green Mini. The choice of vehicle was a nod to Charlene's exit from the soap because she did so in a green Mini she had christened 'Willy' as in 'Will He Go Or Won't He?'
Oh, and guess which song was playing when they made their reappearance - none other than 'Especially For You' by Jason and Kylie.
(It should have been 'Suddenly' by Angry Anderson).
Those weren't the only nods to the history of Scott and Charlene. 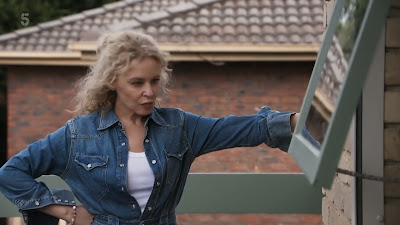 Charlene stopped at the open window of her old home. This was significant because it's where she first met Scott because she was trying to enter the house through the window, Scott thought she was a burglar and pulled her out only to get a punch in the face for his trouble.
It didn't seem as though Guy Pearce was on set the same day as Jason and Kylie. Their characters were reunited, but it was done through trickery.
Jane met up with her former schoolfriends while Mike was still on the street. The scene then cut to Mike realising that Scott and Charlene were also in town. He ran to embrace them. 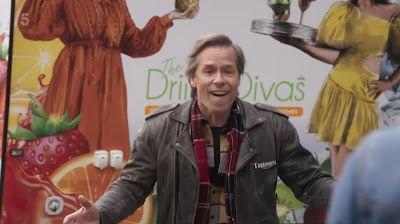 The scene then cut away before we were able to witness the four musketeers as one for the first time in over thirty years.
Clever camera directions was also performed in part of the closing sequence to give the impression that Mike was with Jane, Harold, Paul, Scott and Charlene as they overlooked the street party going on below them. 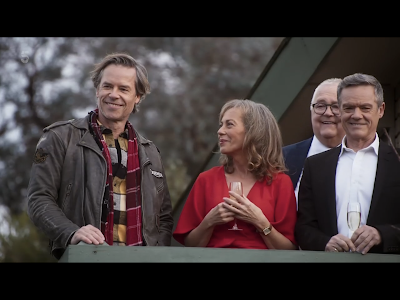 As you can see, in the images both above and below, Guy Pearce does not share any shots with Jason Donovan and Kylie Minogue in one of the final scenes of the soap. 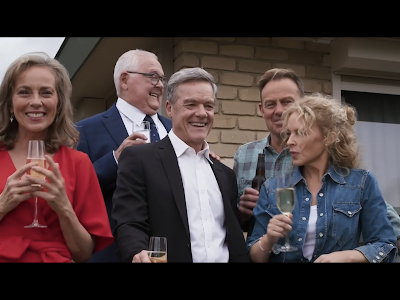 Even though I noticed it, I think it's worth overlooking it just for how special it was just for these iconic characters to be back for one final time whether they properly shared the stage together or not. They still did due to the efforts of the production staff, who should also be honoured for all their work over the years. 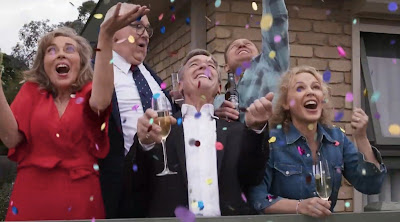 So, yeah, as already noted - Guy Pearce's return for the final two episodes makes him the MVP of the final week of Neighbours for me.
With that said, there were some other returns in the finale which stood out.
But that's a story for tomorrow.
Posted by David Taylor at 12:15 AM