Today is the day. At 9PM BST, Channel 5 will air the final-ever episode of Neighbours.
As you've probably figured out, if you've read the other posts in my Neighbours Week, Neighbours was something I enjoyed watching as a child. I was young when the programme was at its most popular here in Britain.
My following of the show was briefly halted in the 2000's. However, there was a renaissance many years ago when I began to watch it again following its move to Channel 5.
One of the things which kept me glued in each weekday was the return of some of the characters from the past for brief stints. I thought it was quite fun to see how some of those names again. I was even more pleased to see characters come back as regulars.
With a handful, and then some, of old characters coming back tonight, I am bound to be in my element. With that said, their returns come with the knowledge that it'll be for one last hurrah. 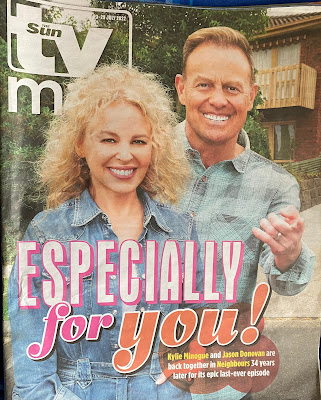 As you can see, the TV magazine - which came with one of last weekend's editions of The Sun - has Kylie Minogue and Jason Donovan on this week's cover to honour the final episode of the soap.
In years from now, people will look back at Neighbours and they'll point to the returns of Charlene and Scott Robinson as being one of the most iconic returns to the soap.
I'd like to argue that, in my opinion obviously, the greatest comeback in Neighbours history is Harold Bishop's.
Harold, who was lost at sea in 1991 (I believe), returned five years later under a new name of Ted after suffering amnesia from his accident. He eventually regained his memory and became good old Harold for many years afterwards. Ian Smith, who plays Harold, returned a few weeks ago for the final run to the finish line.
Harold's mid-1990's comeback will always be number one. An honourable mention has to go to Jim Robinson's ghostly return during Christmas of 2018, though.
In tomorrow's post, I'll share my immediate thoughts after watching tonight's finale.
Posted by David Taylor at 6:00 AM