In yesterday's post, I wrote about how The Sun newspaper jumped on the Neighbours boom within Great Britain by launching a Neighbours-themed competition

It wasn't the only thing The Sun latched onto.

As you'll see below, I've had a look on eBay to see if a Neighbours sticker album, which was published by The Sun,  is on there. It is and it's going for a ridiculous price.

£20 for that!? I got mine for free. But it came with some disappointment along the way. 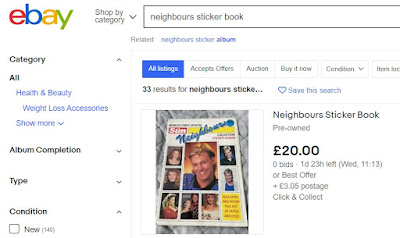 You see, back when The Sun launched the Neighbours sticker album, the newspaper gave away free books. In order to get one, I had to collect coupons inside the daily newspaper and then bring them to a newsagent once I had saved up enough.
Once I had cut out and collected enough of the numbered squares, I glued them onto the form (which was also cut out of the paper) and took it to a local newsagent.
I asked the old lady who owned the shop if she had any copies of the Neighbours sticker album. She told me she hadn't and that she would 'look out for it'.
I returned to the shop the next morning. I asked again. Still no. I then visited again after school. Same result.
The process repeated each and every school day. For weeks. The piece of paper with coupons glued to it remained in my mother's purse for the time when the sticker book was finally on the shelf of that shop.
And then it was there.
I rushed outside the shop and to my mother who was walking me home from school. I asked for the coupons and she handed them to me.
Returning to the shop, I grabbed the book from its shelf and walked up to the counter. The lady I had pestered for weeks was sat behind the counter waiting for me. I handed her the sticker book and then parted with my coupons. I was finally going to be an owner of the Neighbours sticker book and my collecting could begin.
To quote Lee Corso from ESPN College GameDay: Not so fast, my friend.
'What's this?' asked the shopkeeper.
'It's to get a free copy of the sticker book. It's from The Sun.'
She read the small print on the coupon. Importantly for her, I am sure she came across the part which told the retailer to give the person the book and The Sun would reimburse them for the loss.
'I don't do that.' She told me.
And that was that. She handed back the piece of newspaper with the coupons and I put the book back on the shelf.
I still think about that anticlimactic build-up every time I am reminded of the lady and her shop. Sure, she probably had a right to refuse the 'sale', but it wasn't as if she was going to lose anything. She simply didn't want to be bothered having to deal with the process of reimbursement. Had it been me, and I had seen a child come into my shop twice a day for weeks asking for something, I would have happily handed the item over. Even if you want to look at it from a business decision - that child was going to have to come back to the shop, again and again, to buy stickers for the book!
This story ends happily ever after. Sort of.
I was able to find a shop with the album and managed to use the coupons to get a copy. As for the collecting - well, I didn't manage to complete the book.
Posted by David Taylor at 12:00 AM