In yesterday's post, I wrote about how popular the Australian soap opera - Neighbours - was with the British public in its early years.
Whenever something becomes hot, there is an opportunity for merchandising and other forms of synergy. Neighbours was no exception.
Sometime in 1988, a Neighbours-themed board game was released.
The first time I played it was at a schoolfriend's home.
I went to his place for dinner after school one day. To start off, he showed us a videotape he had received from a relative in Australia. It was an episode of Neighbours. Back then, the BBC was eighteen months behind Australia when it came to airing the programme. Therefore, my friend and I had the opportunity to watch an episode with characters that hadn't debuted over here.
It was the first time I got to see Todd and Katie Landers. I vividly recall seeing them visiting Paul and Gail Robinson's home.
That's really all I can remember about that particular episode.
The video wasn't the only thing my friend's relative had sent him. He was also given The Neighbours Game.
Going by memory - in the game, each player gets a handful of cards with certain character names and situations. It is then their job to create a storyline using the character and situation cards.
For example - one of the players may have been dealt cards with 'Harold Bishop', 'buys a plant' and 'gets sent to a nursing home' and then they could have used those three cards to build up a sentence for a storyline when it was their turn to add their plot to the game board.
I've had a look on eBay as I'm writing this post. Boxes of the game are on there. 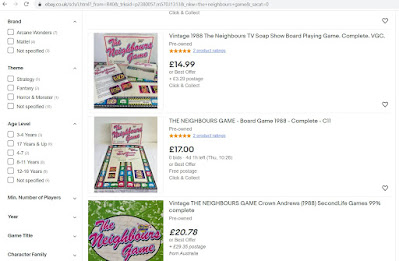 I ended up getting my own Neighbours Game back in 1988. There was something different between my edition and the one my friend had direct from Australia.
As I've already noted, we were eighteen months behind Australia. Therefore, my friend's edition contained names of characters yet to appear on our screens. Mine, on the other hand, only had characters that were on UK screens.
With that said, it was a fun game. Thinking about it, it's the kind of game that I would even enjoy playing nowadays.
There is one other 'game' I can recall from Neighbours' British Boom.
The Sun newspaper ran a competition in which readers were given a list of characters from Coronation Street, Emmerdale Farm (it was before they dropped 'Farm' from the name!), Eastenders and - possibly - Brookside.
The aim of the comp was to work out which characters/actors from Britain would be perfect to play already established characters from Neighbours.
I remember only one person in my entry.
I had Cy Chadwick, who played Nick Bates in Emmerdale Farm, as my pick to portray Scott Robinson in Neighbours.
Chadwick had the blonde hair and was close to the same age as Jason Donovan. I thought it was my best selection.
As noted, I cannot remember any of the other people I had in my entry.
It should go without saying I didn't end up winning that competition. But, I'd be very surprised if Cy Chadwick as Scott Robinson was not on the winners' list.
Posted by David Taylor at 12:00 AM