I've just finished watching last night's edition of WWE Raw and felt compelled to write about something. Or rather - someone.
The show celebrated it being twenty years since John Cena debuted with the company. It opened up with film of him walking into the building with a guard of honour of current WWE staff.
Then, throughout the episode, they showed clips and had other wrestlers send in messages to Cena. Some were even from wrestlers who currently work for AEW, which was somewhat surprising.
Cena came down and cut a really nice promo in which he talked about how the fans had made him what he is today. He got slightly emotional doing it. 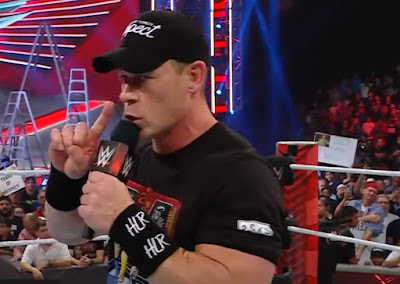 My takeaway is that episode strengthened my long-known opinion of how much of a professional Cena is.
I grew up watching the Hulk Hogan era. It's very fair to say Hogan did a lot of work for charities, but - as a child - I didn't really show interest in that side of pro wrestling. As an adult, and with what I'd like to believe - a better understanding of the business both on and off screen, I see John Cena and everything he does and he really comes across as the pro's pro.
Every good thing that guy gets is deserved.
Posted by David Taylor at 10:37 AM