The current issue of the Codeword magazine I get each month arrived in the post last week.

I leafed through it and noticed that one of the 'Star Codeword' puzzles - in which the face of a celebrity is featured and their name is found inside the puzzle itself - had a picture of the BBC's Clive Myrie.

Taking a picture of part of the puzzle, I thought it would be funny to tweet the newsreader and host of Mastermind. 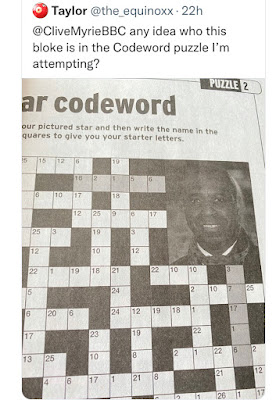 I sent the picture across to Myrie asking him 'any idea who this bloke is in the codeword puzzle I'm attempting?'
After sending the tweet, I had a go at the puzzle itself. If you've followed my interest in codeword puzzles since I first attempted one a little under two years ago, you'll know that less than twenty minutes to complete one is my goal.
Look how close I came. Twenty seconds over! 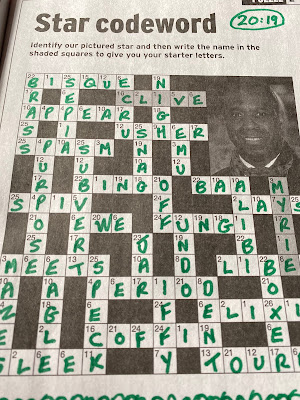