A few weeks ago, when I was ordering some drink powders for the Rating Drink Powders series I have ran here on the blog since last year, I came across a box of a Skittles branded powders. Unfortunately, the box had sold out, so I thought I would keep an eye out for it to be restocked.
Well, it was restocked alright. I not only came across the original flavour I had wanted to try. I also noticed that there were two other varieties to buy online: Tropical Punch and Wild Berry Punch.
Now that I have the three powders, I have to let them square off to see which Skittles drink is the best of the trio.
So, let's begin... 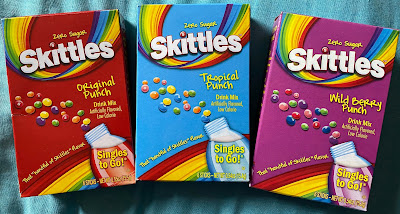 Skittles Original Punch
This is the drink that's supposed to blend the original Skittles flavour in. When I opened the sachet, I sensed a bit of strawberry and was not sure whether I would like the drink. Then, once the powder was added to the water, it had a red flavour which strengthened the little anxiety I had that it would taste of strawberry.

Well - after a few sips (or rather big gulps), I was relieved to taste no strawberry. None of the Skittles flavours stood out, however. It just tasted.. fruity. Therefore, it tasted exactly as it should.

Skittles Tropical Punch
The colour of the Tropical Punch drink was a thick cloudy blue, if that makes sense. Visually, it reminded me of a Soda Stream drink I enjoyed as a child - Mr T's Knockout Punch. Ironically, this Skittles drink, just like the others, are 'punch'. In this case, going by the flavours of the real sweets we're meant to taste a combination of the following: banana berry, kiwi lime, pineapple passionfruit, strawberry starfruit, mango tangelo.

Just like with the original, no single flavour stood out. It was a nice refreshing drink, but so was the first.

Skittles Wild Berry Punch
When I tore the sachet, and caught a whiff of the powder, it brought back memories of a sweet I used to find at the shop on the way to school back in the day. It had a plastic top and you would pull it off and it looked like a lipstick (Well, to be fair - it more resembled a stick of faded pink chalk). It had a cherry, possibly berry, flavour.

I didn't get the sensation of the lipstick-chalk sweet once I drank the purply coloured drink. The taste was, just like with the other two Skittles drinks, very nice and refreshing without one flavour overpowering any other.

For what it's worth, the flavours inside the wild berry version of the sweets are: berry punch, strawberry, melon berry, wild cherry and raspberry.

Result
On paper, it's a three-way tie with each getting three-and-a-half stars.

If I had three packets in front of me and told I had to choose one to remain and the other two to go forever, I would - without hesitation - pick the blue box. Therefore, the winner - by a nose - is the Tropical Punch.