In a post published a month ago, I wrote about coming across a website which was selling baked beans with a Dr. Pepper flavour. I purposely set the post to go live on April Fool's Day in order to cast doubt over the existence of such a product.

Trust me now. They exist. I've tried them.

A few days after writing about the beans, I decided to buy a tin. Shortly after that, I cooked them up and had them on a toasted bagel (yes, you read that right - a toasted bagel!). 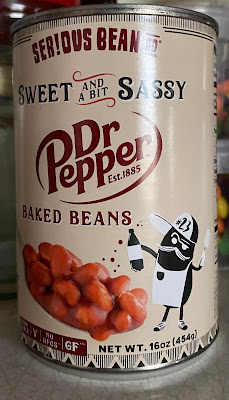 Toasted bagels and baked beans are something I've tried many times in the past. Because of how soft a bagel is, it soaks up the juice of the beans well and makes it - for me - more enjoyable than eating baked beans on toast made with regular bread.
You should try it.
Anyway, back to the Dr. Pepper flavoured beans - they were, for want of a better word, intriguing. Yes, I could taste the drink while I ate my meal. It was very sweet and somewhat enjoyable. 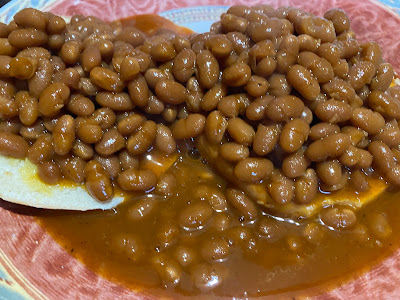 I don't think I would go out of my way to try them again, however. I know I state that a lot whenever I try foods or drinks that pique my interest due to their uniqueness.

There are so many peculiar things out there. I cannot be tied down when I could be sampling other random food or drink items.

To remain on the beans topic, the same company that produces these Dr. Pepper beans have other varieties. As of the time of writing, I could purchase the following flavours: sweet and smoky chipotle, buckin' buffalo, jalapeno and bacon as well as southern mustard.

There is no way I would even entertain the idea of eating most of those. The only one I MIGHT make a case for is southern mustard.

And even that would be at a push..