The Day The Bad Guy Came To Town

On December 5th 2013, I published a post titled The Day The WWF Came To Town in which I wrote about the WWF's stop in Cardiff on one of its UK tours.
Of the memories I shared about that day, I noted that I had 'my picture taken with Razor Ramon who, at that time, was my favourite wrestler'.
With Scott Hall - the man who wrestled as Razor Ramon at that time in his life - passing away last week, I have been thinking a lot about the months before, and some time after, December 5th 1993.
To tell the story of my appreciation of Razor Ramon, I have to start at the beginning. 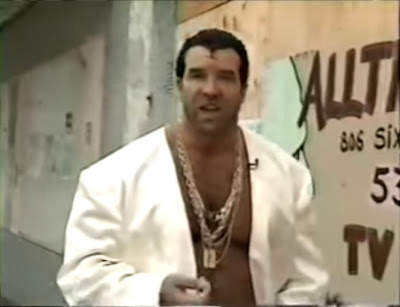 Sometime during the summer of 1992, the WWF began airing vignettes of Razor Ramon during its episodes of Superstars and Wrestling Challenge. When I first saw him, I knew who he was.
He had recently worked for World Championship Wrestling as The Diamond Studd.
I recall going to school the following Monday and talking with a classmate who had also seen Ramon's first introduction to WWF viewers. I asked 'Did you see the Diamond Studd on WWF Superstars over the weekend?
It prompted a 'nah, that wasn't Diamond Studd. This guy's name is Razor' kind of response.
I then had to explain to my friend how Studd and Ramon were one and the same and that people who jumped from one company to the other often changed their gimmicks.
But, here's the thing: Razor Ramon and the Diamond Studd were not too dissimilar. Hall's portrayal of Ramon was an enhancement of the WCW persona with a lot of Tony Montana, from Scarface, thrown in for more flavour.
Those vignettes ran for weeks. 1992 was the year of the Wembley Stadium SummerSlam. However, Ramon was not on the card. I cannot recall if he had debuted on TV back then, but I believe it wasn't until the TVs after the August PPV.
Either way, by November, Ramon was working as one of the top heels in the company. He took part in the big angle before, and during, the 1992 Survivor Series when he teamed up with Ric Flair in a loss to 'Macho Man' Randy Savage and Mr. Perfect (who, in another life, was Hall's tag team partner in the AWA).
At the following PPV - the 1993 Royal Rumble, Ramon was the number one contender to Bret Hart's WWF Championship. He lost.
He beat Bob Backlund in a short contest at WrestleMania IX in April of 1993. And then the wheels started rolling to begin his babyface push.
It started off with a surprise loss to a scrawny wrestler named 'The Kid' on an episode of WWF Monday Night Raw. The upset led to Ramon into requesting a rematch over the coming weeks. Each week, he would offer up some money begging the then-named 1-2-3 Kid to take up the challenge.
When the Kid finally accepted, the match ended with Kid running off with the bag full of cash. As a result, most of the heel wrestlers on the WWF roster mocked Ramon for having the wool pulled over his eyes.
At SummerSlam 1993, Ramon's role as one of the babyfaces in the company was confirmed when he met the Million Dollar Man Ted Dibiase, who - at the time - was one of the midcard heels in the company
After cheering on Ramon as a heel, it was welcoming to finally be on Team Ramon now that he was on the good side.
Back then, you would find more merchandise for babyface wrestlers than you would for the baddies. Ramon as a babyface opened up the opportunity for merch for Hall.
One such item was a yellow and white t-shirt which had Ramon's face covering most of the fabric. If you followed wrestling back then, you'll certainly remember the 'Oozing Machismo' tee.
I wanted one of those shirts.
And I thought the opportunity would arise when the WWF stopped in Cardiff for its December tour of 1993.
I had tickets for the show, but - as I wrote about in the post from 2013 - I also visited the hotel the crew stayed at before they crossed the road to the arena later that evening.
Of all the wrestlers advertised for the show, I wanted to meet Razor Ramon the most. I'm not just saying that because of last week's news. My quest for December 5 1993 was to meet Razor Ramon and buy an Oozing Machismo t-shirt.
I met Ramon.
As soon as he departed his bus, I walked up to him and asked if I could have my photograph taken with him. He obliged. I put my thumb up before the camera clicked. Once that was done, I remember turning to the wrestler and thanking him. I also recall patting him on the shoulder as a way of thanks.
Later that day, still at the hotel, I saw Ramon again. This time we were inside the lobby. I asked if he could sign a copy of the WWF Superstars magazine I had brought with me. Once again, he honoured my request.
Ramon and I - or rather: Ramon, with me tagging along beside him, left the hotel and as we were walking outside I asked him what was, on that day, an important question.
'Will they have your yellow t-shirt on sale tonight?'
'No, they only sell those shirts in the States. There'll be a different shirt at the arena.'
It was a slight disappointment to know I would miss out on the shirt. However, the takeaway from that short conversation wasn't the fact that I wouldn't get hold of the shirt. It was the realisation that Ramon, or rather Hall, had spoken to me with his regular American accent.
I've never forgotten that conversation and it dawning on me that he had dropped the Cuban accent to speak with me one-to-one.
I cannot recall if it was him, but it was either Ramon, Randy Savage, Sean Waltman (1-2-3 Kid) or Shawn Michaels who asked me the way to a certain street in my city which had a gym. I had been talking to all of them that day and I pointed the way. All of those guys were together and headed to that street and it was here I decided I may as well walk with them as I had to get myself home to get ready for the event later that night.
I did end up buying the Razor Ramon t-shirt that was sold at the arena that night. I took it out of storage over the weekend to have a look at it. It was the first WWF t-shirt I owned. 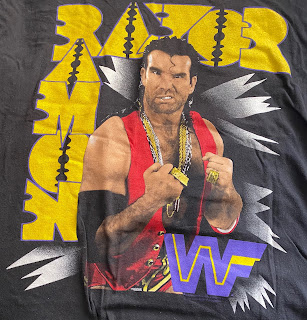 On the back of the t-shirt is the 'Razor' logo which appeared on Ramon's wrestling trunks.

Razor Ramon successfully defended the Intercontinental Championship against Irwin R Schyster later that night. I would see him wrestle live one more time before he headed off to join World Championship Wrestling.
The Bad Guy defeated Dean Douglas on October 4 1995 inside London's Royal Albert Hall. One of the things I recall from that trip with my dad is him noting that Ramon had the most cheers that night when he came to the ring for his match.
Scott Hall's life was filled with tragedy and triumph. I wanted to focus solely on Hall's first stint in the WWF because it allowed me to tell my story about the day I met someone who, at that time in my life, was a hero to me.
I'll always remember that conversation about the Oozing Machismo shirt. I didn't give up on my wish to own one. A few months after Scott Hall told me they were only available in the States, I ordered the t-shirt by mail.
I still have it stored away with all the other WWF/WCW t-shirts I accumulated over those years. 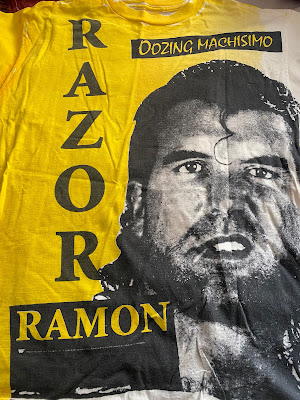