Ryan To The Colts

The Indianapolis Colts have their new quarterback.

Or should that be 'The Indianapolis Colts have their latest quarterback'?

The team made a trade with the Atlanta Falcons to bring Matt Ryan in. 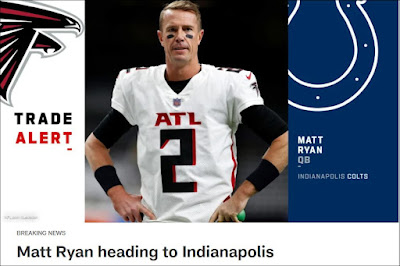 The news resulted in an eyeroll and shrug of the shoulders from me.

In my opinion, Ryan hasn't been good since the third quarter of Super Bowl in February 2017. Being 21-3 up at half-time before losing the big one 28-34 would do that to you.

In return, Indianapolis is giving the Falcons a third round pick in the draft. I suppose that's a fair trade for someone who will be thirty-seven when the 2022 season kicks off later this year.

Ryan will be the Colts' sixth different week one starting quarterback since 2017. Shocking.