My spreadsheet had its first loss - when it comes to betting on Thursday night NFL games in 2021 - last week when the pick to gamble on Washington -3 ended up being an incorrect call following Washington's 30-29 win over the Giants.

I've had a look at what it's recommendations are for tonight's game between Carolina and Houston. It's once again only giving one play due to it sharing a line with the bookies.

It projects that the Panthers will win by eight points and that the game will have forty-five points scored in it. With the line set at Carolina -8 and the total line set at 43, the play is on the total.

To assist - or critique - the play, I've had a look at the database I have created which contains the results from the 2001 season right up to last year.

It sure does cast doubt in the spreadsheet, doesn't it?
Even the Carolina to win by eight play would have been worrisome when you realise that the Panthers have not covered the spread as favourites of over -3 in these meetings since 2001.
With all that said, the Texans will be starting a rookie quarterback in Davis Mills. 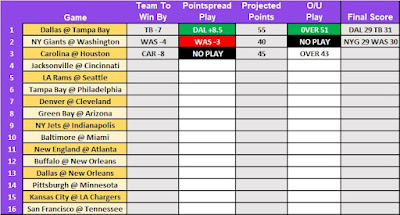