The Smyths Toys Superstore catalogue arrived in the post yesterday afternoon and - as I usually do for what has become an annual ritual - I took the book out of its envelope to see if any WWE action figures appear on this year's cover.

To answer the question - yes, Drew McIntyre riding a motorbike was indeed on the front. It wasn't the thing that caught my attention the most, however. 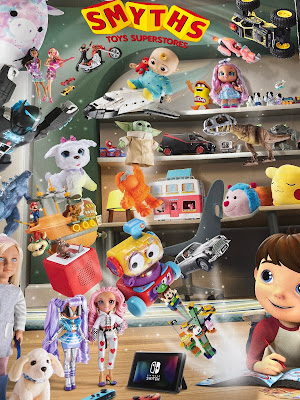 On one of the shelves, I saw what looked like the van from The A-Team.
'Is that the A-Team van?' I wondered. Surely not, it has been many years since the series was cancelled and it has been many years since the movie reboot. It couldn't be, could it?
I leafed through the three hundred and twenty-six page book and couldn't find anything. I then did what I should have done from the start - I typed 'A-Team' into the search function of the Smyths website.
I was led to a page which said that it was indeed an A-Team van. Playmobil make it. I looked back inside the catalogue, specifically where Playmobil toys could be found, and there it was! 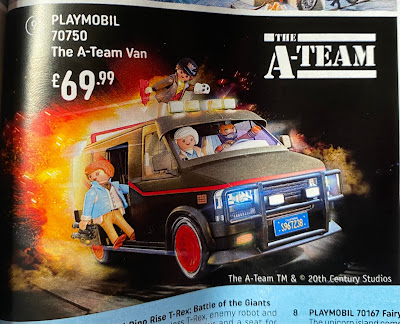 I am stunned. I never thought I would ever see A-Team toys in this day and age. Back when the series was popular - I owned a toy van. I was able to put all of the figures in it and ride it around the floors of my home.
It's really cool to see The A-Team being targeted to children of the 21st Century. Still - I cannot help but wonder if this would appeal more to parents who grew up loving the series. Maybe, I suppose, as a way to then appeal to their children or other relations.
The van comes with four figures and is priced at £69.99. I have no intention of buying it for myself, or my nephews (they're both too old for Playmobil!) for that matter. Not that I could - they're sold out right now.