Lionel Messi has landed at PSG.

And I've landed £7.20 from a football bet I placed over a year ago. 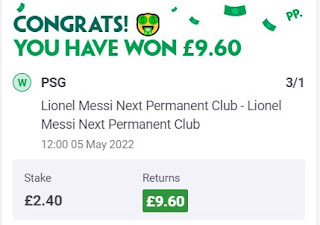 Back then, when Messi announced that he was leaving Barcelona, I felt that there were one of two clubs he could go to. The first was Paris St. Germain and the other was Manchester City. I felt that the former had the strongest chance, so gambled on PSG at 3/1 to be Messi's 'Next Permanent Club'.

But then Messi ended up staying. For one more year.

Or so we were led to believe.

A few weeks ago, it was announced that Messi would remain at Barca and sign a new contract. At this point, I felt the bet was certainly dead. Messi was sure to play out his career at the club he joined in 2004.

Fast forward to last week, when Barcelona announced that Messi was leaving, and my bet kicked back to life.

As mentioned in a post published last Saturday, I still felt there was only one of two possible destinations for the Argentine footballer with PSG with the strongest chance ahead of Manchester City.

It all turned out to be the case. Messi arrived in Paris yesterday and will make his first press conference, as a PSG player, within the next few minutes.