Last week, I published a post titled A Bet Builder Wager On Week 2's MNF in which I had a punt on the Monday Night Football game between the Green Bay Packers and Detroit Lions.

I'm back to try again. This time, I've gambled on the Dallas versus Philadelphia game that will be played in a little over an hour.

Here are the things I need to go by way in the game: 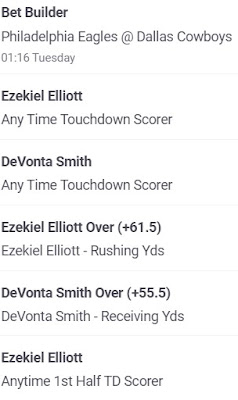 Update: Well, I had three right this week. I won with all of the Ezekiel Elliott requirements (he scored the opening touchdown in the first quarter and ended up rushing for over 61.5 yards by picking up 95). I didn't get anywhere with DeVonta Smith. He didn't score a touchdown and only managed twenty-eight yards from three receptions.