A few weeks ago, a German friend was talking about a chocolate bar called Duplo. I had never heard of one before. The only 'Duplo' thing I was aware of, at that time, is the children's brick toys - a spinoff from Lego.

Days after finding out about the existence of Duplo, I came across the chocolates on the Iceland website when I was doing some online shopping. They appeared in the 'New' product section.

I had to try them. 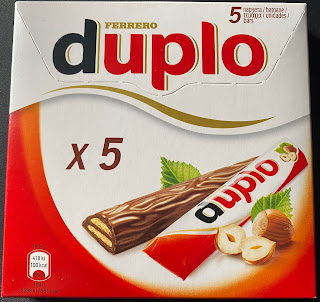 The box was reminiscent of the Kinder bars - also from the Ferrero family - that  I am very fond of. Heck, the wrappers of the bar look like them as well.

After taking off the wrapper, I was met by a small bar of chocolate which looked a bit like a tree trunk. There used to be a chocolate bar here in the UK named Logger which had a similar pattern. 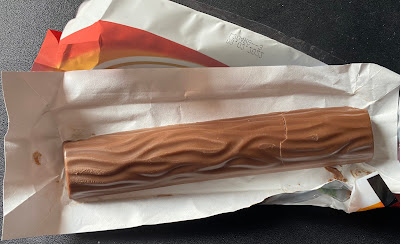 I took a bite.
Seeing as the chocolate is made by Ferrero, I was anticipating something like a Ferrero Rocher. In a way it kind of did taste like one due to both products having a hazelnut taste. The Duplo has a wafery inside which, considering the outside looked like a tree, slightly tricked my mind into believing I was eating bark.
It was an interesting experience to taste the texture that I am sure was not the intention of the chocolate makers.
Would I buy these again? Maybe. I prefer Ferrero's Kinder bars first and foremost. And always will.
Posted by David Taylor at 12:00 AM