If you've been following the blog over the summer, you'll know that I've published two posts in which I've tried drink powders from America.

The powders are placed into bottles of water to give them flavour. The first post, in which I ranked the first batch of powders I had, was published on May 17th 2021. The follow-up came with the 'Rating Drink Powders II' on July 22nd.

Expect at least another three posts. The reason? Well, because look what I've bought... 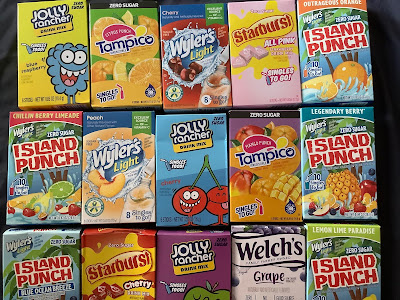 I have fifteen different boxes to try.
What I am planning to do is run another series of posts with my thoughts on the flavours. I'll do five varieties at a time and MIGHT do them in the order as they appear in the picture above.
As of right now, the blue raspberry flavour - that is made by Starburst - is the one to beat. There is a challenger in the current set I have as there is a Jolly Rancher Blue Raspberry box in the new collection.
Game on!
Posted by David Taylor at 7:00 AM