Below Zero On A Warm Saturday Morning

It was so good seeing Laurel and Hardy's Below Zero on television yesterday.
The short aired on Talking Pictures TV, here in the UK, as part of its Laurel and Hardy season.
The film holds a very dear place in my heart as it was one of a few Laurel and Hardy titles that were on a VHS tape that my father recorded from TV back in the early 1980s.
It for sure was the first Laurel and Hardy film I watched. It could very well have been the first film I watched ever. That's how important it is to me.
I had never seen it transmit on TV before yesterday, so - when I knew that Talking Pictures had it on the schedule for 9:35AM - I made sure to do so.
The story, along with most of the visual gags, still hold up today.
If the saying about 'what goes around comes around' is true, I hope at least one child out there watched it and it will end up meaning something to them just as it did to me for all these years. 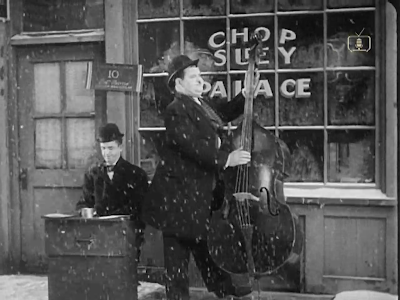 I wrote about the film when it celebrated its 85th anniversary. You can read about it IN THIS POST.
Posted by David Taylor at 7:00 AM