I had it all worked out.

After Wales drew 1-1 with Switzerland, in the second game of the Euro 2020 tournament, I knew exactly what I was going to write for today's post.

I closed yesterday's post noting that I had predicted that the score would be 1-1. When the final score was as I guessed, I wanted to write about how I had a perfect start after guessing Italy would beat Turkey 3-0 on night one.

Before writing, I thought to myself that 'I may as well wait - the next two games will surely bring be back down to fifty-fifty in correct score guesswork'.

Little did I know the next two results would not be the thing that ruined the nice start to Euro 2020.

As many will know by now, just before half-time in the Denmark .vs. Finland game - Denmark's Christian Eriksen collapsed on the field.

I had been called just before this happened. When I returned to the TV, I noticed that the game had been halted and assumed that an injury, like a leg break, had occurred.

As I continued to watch, I learnt that it was Christian Eriksen who was being seen to. The players had made a wall around their fallen teammate. However, I caught a glimpse of somebody doing CPR to him.

It brought back memories of two incidents from following pro wrestling: the day Owen Hart died during the Over The Edge 1999 PPV and the night when Jerry Lawler had a heart attack while commentating on WWE Raw in 2012.

On both those occasions, the company chose to film away from the situation. Here I was twenty-two years removed from the first of those two incidents I refer to, and I witness a guy being treated for a potential heart attack on live TV.

On top of that, the cameras continued to roll as Eriksen's partner was seen at pitch-side as the team worked on the player.

That was poor taste if ever I saw it. 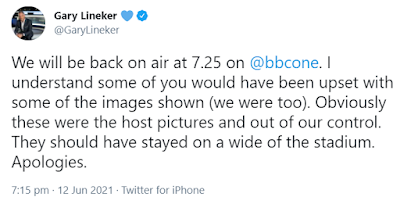 The BBC presenter's excuse is BS if you ask me.

Only an idiot would believe that the BBC had no power in stopping those host pictures being aired. They could have gone to the studio or - at worst - just pulled the transmission and have a screen up with an on-screen message.

I'm not a 'snowflake', but I am what I would like to believe someone with a bit of common sense and the images from yesterday could have caused a lot of distress to many watching on. Some children.

The positive from yesterday's incident is Ericksen was saved by those who came to his aid.
Posted by David Taylor at 11:28 AM