If you grew up anywhere between the 1980's right up to this very moment, you may know about a potato snack found in the crisps aisle of your local shop called Space Raiders.

The 'crisps' come in a range of flavours. The most iconic flavour - in my opinion - is pickled onion, but there is also beef and other flavours that I am trying to remind myself of (I am guessing there is a spicy one but can't recall the last time I saw that one).

Anyway, there is a reason why I am dedicating today's post to Space Raiders.

The supermarket chain - Iceland - has brought out potato snacks you can bake in the oven that resemble Space Raiders.

And guess who bought a packet for the purpose of writing about it on this blog? 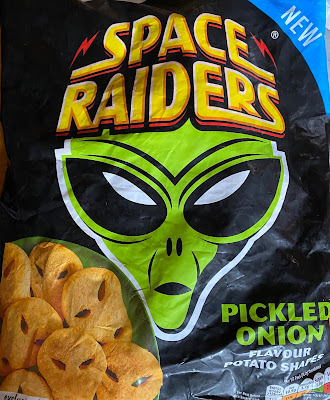 Those who know what the packets of crisps currently look like will know that the Space Raiders logo and alien picture is identical on the bag of ftozen shapes.

They come in two flavours - pickled onion and beef. I chose the pickled onion flavour and cooked some last night to see what they're like.

As you'll see below, the shapes are also identical to what the 'crisps' look like. 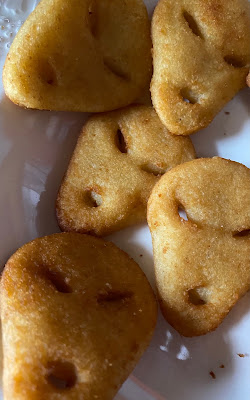 The alien faces tasted more like regular onion and potato bakes rather than 'pickled onion'. I guessed that would happen even before I cooked them.

I'll give the beef ones a go next time. Although that might be an empty promise.

You see - in 2014, I wrote about Iceland bringing out potato bakes with the Hula Hoops branding on them. It should be worth mentioning that the supermarket chain has brought those back claiming that they are 'new and exclusive'.

In the post from 2014, I tried the cheese and onion flavour. I closed the post stating that I would try the beef ones next.

If I did try them (and if I had to fight with my memory, I think I'll find that I did but have forgotten), I never wrote about tasting them.

I might have to honour that promise from seven years ago before I consider purchasing and cooking up the beef flavoured Space Raiders.