After messing up a Kriss Cross (or Criss Cross) wordfit puzzle in last Sunday's post, I thought I would try to redeem myself by doing another one.

This time, I've chosen to do a bigger puzzle. It's quite a challenge considering the mess up from last week.

As you can see below, the 'Giant Kriss Kross' has a slight theme as there are shaded letters on the grid that should spell out a TV series.

There are two pictures that are clues of the programme. One is of stairs going up and down and the other is of bells you'd find at homes of affluent people who would have servants working for them. 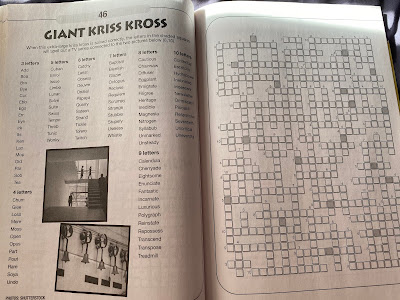 With the two-worded series having eight letters for the first word and ten for its second, I think it's safe to conclude that the programme is Upstairs, Downstairs.
Let's see how I go... 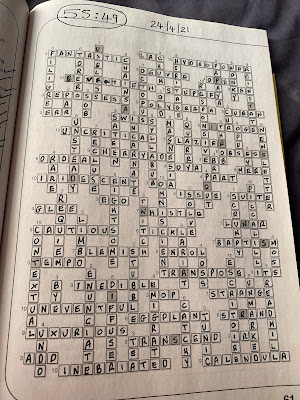 It took me fifty-five minutes and forty-nine seconds to complete it.
Yes, it was difficult to start off with. The TV series was indeed 'Upstairs, Downstairs' and you know what made the puzzle even harder for me? I assumed that the words would have been jumbled up. Therefore, I did not fill in the grey squares until half-way through the puzzle when I realised the shaded boxes spelled out the television programme's title in the correct arrangement of letters.
I'll remember that next time. It may shave off at least five or so minutes from my completion time.
Posted by David Taylor at 12:00 AM