When I last wrote about daily fantasy American football, I mentioned that I had returned £8 after entering a team made up of players from Saturday's divisional round of games. I finished the post by stating that I was unsure whether I would select a team for the Sunday slate of fixtures.

Well - I did end up doing that.

And I ended up winning.

I entered the regular £4.44 contest. After confirming the team, I noticed that there was a free competition available as well. I added the same players in there.

My side closed in 113th position in the free contest, which saw 8,437 teams entered. For that, I was credited with an additional £2.50 to the £12 I won in the big money competition.

I withdrew most of my winnings back to my bank. I left £4.44 in the betting account because I am having a decent run of form at the moment. I may as well pick a side for the upcoming Conference Championship games.

Here's a breakdown of the points scored by my players: 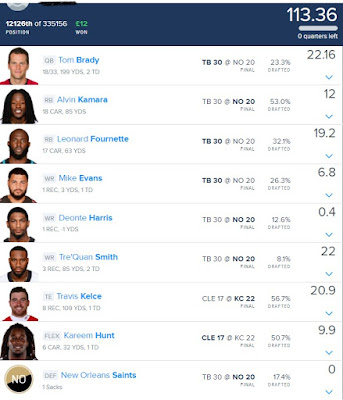