One of the things I forgot to do last year was bet on the third round of the FA Cup.

It simply slipped my mind. I've made sure to have a go this year even though the pandemic could scupper a lot of games. There have been postponements announced already.

I've spent the first part of today doing what I always do and that's place all the teams in one giant division starting with the Premier League table and then add - in order - the Sky Bet Championship, League One, League Two and the Conference (I should refer to it as the National League).

Once the entire table is complete, I take a look at the league position differences between both teams and see how big of a divide there is between the two sides. For example, the Stockport .vs. West Ham United game has a schism of eighty-six league positions which would make the Premier League's Hammers a stronger side than the National League's Stockport County. 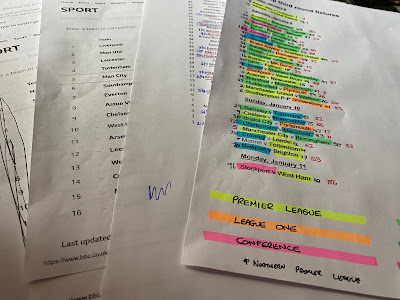 After looking over the differences, I browse the betting markets to see whether anything stands out to me to have a gamble on.

I've gone with the following five teams in a Lucky 31 multiples bet.

I've probably chosen the wrong year to start this back up again after forgetting to do it in 2020, but we'll see how it goes.