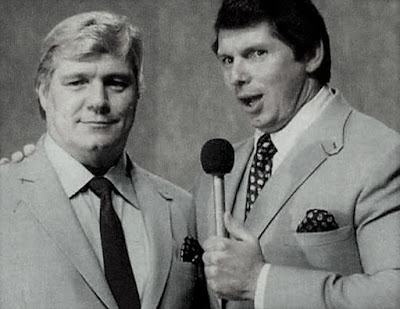 If you've ever talked professional wrestling with me for a certain amount of time, you'll likely come out knowing a few things.

One of those things will surely be that the Royal Rumble is my favourite gimmick match.

The person who came up with the idea of the Royal Rumble - Pat Patterson - passed away recently, and I wanted to write about him today.

Patterson had retired as a professional wrestler when I first began following American wrestling. He accomplished a lot of things in his active career, such as being part of a legendary tag team with Ray Stevens and being crowned the first-ever Intercontinental Champion in the then known World Wide Wrestling Federation (now World Wrestling Entertainment).

By the time I came along, the WWWF had become the WWF (World Wrestling Federation) and Patterson was working behind the scenes as one of Vince McMahon's main guys. As I built my knowledge of the industry, I learned about Patterson's involvement with the development of the Royal Rumble battle royal and he was instantly a legend as far as I was concerned.

His genius in creating the thirty man battle royal - in which two wrestlers start and new combatants enter at two minute intervals - didn't just end there. He booked a lot of the matches each year, so he would have it all planned out in regards to when all the guys came in, who would eliminate who and so on.

Many, and I mean many, of my childhood - and adulthood! - memories from watching key Royal Rumble moments came from Patterson's mind, so - as I sit here - I cannot help but think I should thank him.

You see, as I sit here thinking about how many of my favourite memories as a wrestling fan had Patterson's fingerprints on them, I also couldn't help but recall the time I helped Patterson.

In April of 2006, I was walking  along a path outside a hotel I knew the WWE crew was staying at and heard a loud 'STOP DAT BUS! STOP DAT BUS!' called in my direction.

An open-decked bus was driving near me. I looked over to see who was yelling. It was Pat Patterson running from the hotel lobby.

I caught the attention of the bus driver and he stopped to let Patterson run to the bus and climb aboard. As he was crossing the street, he yelled his thanks to me more than once. He seemed very grateful for my help.

Once he was on the bus, he yet again showed his thanks. This time with a wave and thumbs up. I gave him a thumbs up in return.

After all those amazing ideas booking not just the Rumble match, but many other classics I have watched in all my years following pro wrestling, stopping the bus was the least I could have done.