Better Late Than Never: Battle Of The Christmas Sandwiches 2020

In yesterday's post, I mentioned that I noticed there was a backlog of posts about Christmas that I needed to get through. Below is yet another that was planned before Christmas, but was halted. The reason why it didn't see the light of day until now is because I had planned to add more to it, but the lockdown and other things got in the way. I'll explain more below.
* * *
On November 25th, I published a post titled War of the Christmas Burgers 2020 in which I wrote about trying out a range of festive burgers that have been created by a trio of takeaway companies. I thought I'd do something similar with other establishments.
So, without further ado, here is the Battle of the Christmas Sandwiches.
Subway
Subway's festive menu has a Tiger Pig Sub', a 'Turkey Breast Toasted Bite' and  a 'Turkey Breast Substack' in the range of sandwiches on offer for 2020. I opted for the Tiger Pig Sub.
For those interested, the Tiger Pig Sub consists of  'a giant pork sausage wrapped in streaky bacon, topped with all the trimmings you desire, served best in (our) Tiger Bread'.
I did just that. When I made my order, I chose to have my sandwich made on the tiger bread. I also added lettuce, pickles, black olives, sweetcorn, crispy onions and sea salt.
For the dressing, I chose Chipotle Southwest for one half of the footlong and honey and mustard on the other side.
Here's what one half of the footlong looked like from the outside.

And a glimpse of the messy inside: 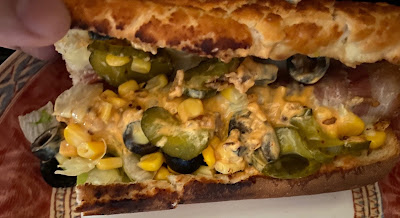 I cannot see where I saw it, but I am certain i read somewhere that the recommended dressing - for this sandwich - is the Chipotle Southwest. That's why I picked it for one half of the sub.
Honey and Mustard is my go to dressing. I should have stuck with that on both sides as I wasn't too keen on what I thought was recommended to me.
As for the sandwich itself - it was okay. However, it's not something I would go out of my way to buy again.
I also added three cookies to my order. Two of them were festive flavoured (one was Christmas Pudding and the other was Chocolate Orange). 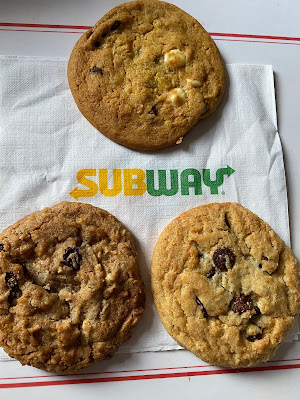 Of the two festive cookies, I thought the Christmas Pudding one was the better of the two. Chocolate Orange came a very close second. though.
Tim Hortons
The special festive menu item from Tim Hortons is the Festive Chicken Sandwich. It is made up of two chicken fillets, cheese, bacon, rocket lettuce and a cranberry sauce. 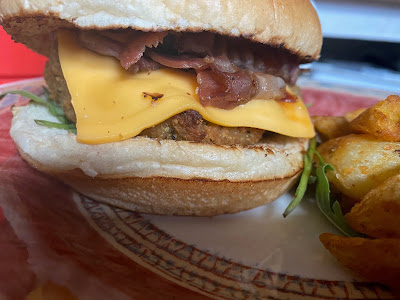 The inside doesn't look appealing, does it? However - I didn't dislike the sandwich. It was okay, but nothing more. 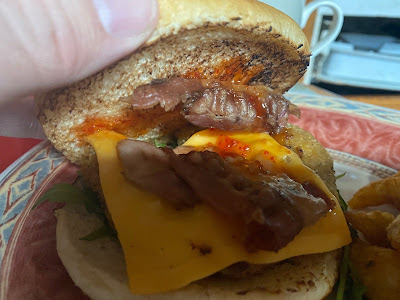 The best part of the meal - for me, and everyone else in my family - was the Christmas doughnuts I bought alongside my order. There are three different kinds available. I bought a six pack. 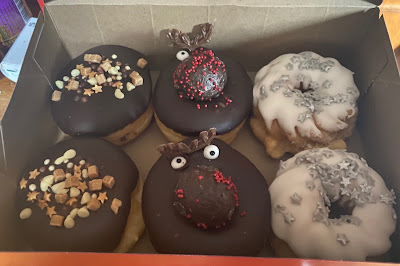 Pret A Manger
I was intrigued by one of Pret A Manger's vegetarian offerings for this year. It is a brie, pistachio and cranberry baguette. 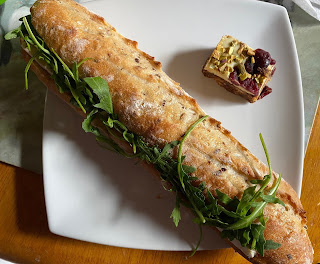 As you can see - in the picture above - the baguette also came with rocket.
When I took the first bite, the first thing I could taste was pistachio and then the brie. It seemed really peculiar to eat pistachio nuts in a sandwich, but I soon became comfortable with it. However, by the end of the sandwich, I felt that it had gone OTT on the nuts.
The unique ingredient became somewhat obnoxious, if you will.
As well as the baguette, I ordered the company's Christmas Tiffin (gingerbread biscuit with cranberries, chocolate and pistachio). I split it between three of us, so I only had a small piece (you can see it in the picture). I didn't eat it though. After the overdosing on pistachios in the sandwich, I couldn't tolerate any more pistachio, so gave my slice away.
You might think I dislike pistachios from my experience here, but that's not true. I guess I dislike too many pistachios in one sitting.
* * *
I was hoping to finish this post by trying a festive-themed baguette from Greggs as well as a sandwich from at least one supermarket (for example, I had my eye on Tesco's Christmas turkey curry wrap).
The battle was quite crappy considering I thought two of the sandwiches were 'okay' and found the third one way over the top.
I call it a draw between Subway and Tim Hortons.
Posted by David Taylor at 12:00 AM