War Of The Christmas Burgers 2020

As is usually the case - at this time of year - fast food restaurants, and other establishments, have added new items to their menus in the build up to Christmas. I have already tried Pizza Hut's Christmas Pizza (you can read about it in THIS POST) and have now tried the burgers that are available from Burger King, KFC and McDonald's.

After trying all three items within the past fortnight, I thought I'd compare them in one post. So, starting with the first burger I tried right through the third, we have.. 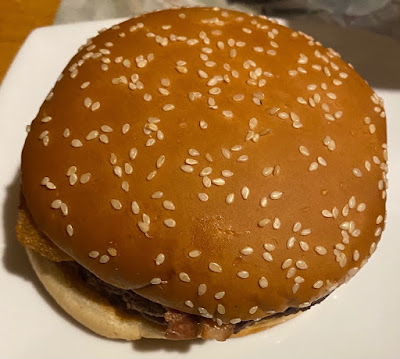 The burger consists of two beef patties with two slices of cheese. Along with the main ingredients are bacon, mayonnaise, barbecue sauce (obviously!) and... five onion rings as a play on the 'Five Gold Rings' from The Twelve Days of Christmas. 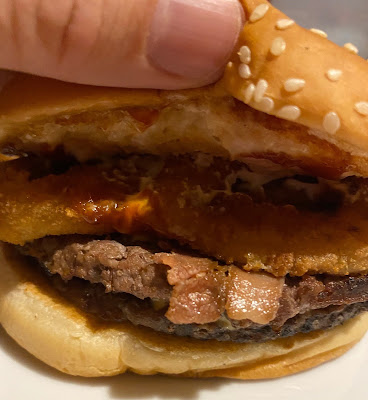 The above picture is a feeble attempt at showing what it looked like inside. You can see some of the beef patties, a bit of bacon and the five onion rings squashed together.
I enjoyed most of the burger. However, I found myself struggling to finish it off near the end. I don't know whether that's a good or bad thing...
KFC
KFC went in an interesting direction with its Christmas special for 2020.
The Gravy Burger box meal came in a festive-themed box. Packed inside it was the aforementioned gravy burger (more or that in a moment), a mini fillet, a side of my choice (I picked fries), a dip pot of Gravynnaise and a pot of KFC gravy. 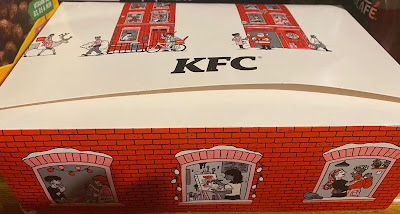 Before I get to the gimmick of the 'gravy burger', I'll explain what it consists of. It has an original KFC chicken fillet with cheese, gravynnaise and a hash brown.
As you can see, in the picture directly below, the hash brown has a dip in the middle. This is to allow the diner to pour their gravy onto the burger. 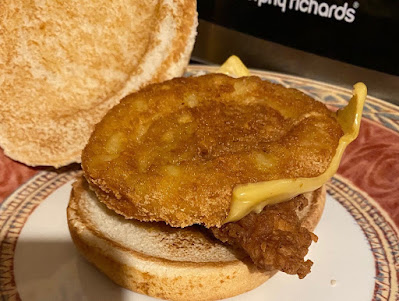 This is a picture of my burger after I added the gravy to it. 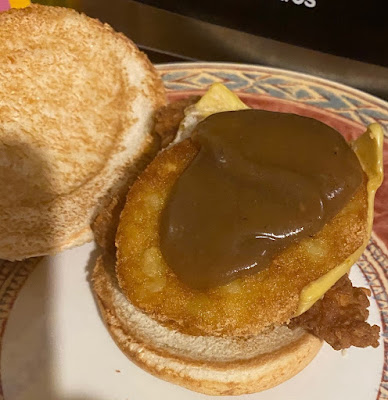 I thought the gravy idea was really cool. As you can see, I placed all the contents onto a plate. I used the Gravynnaise to dip my fries and chicken fillet. Gravynnaise is exactly what you would expect from its name - a mayonnaise that is flavoured like gravy. 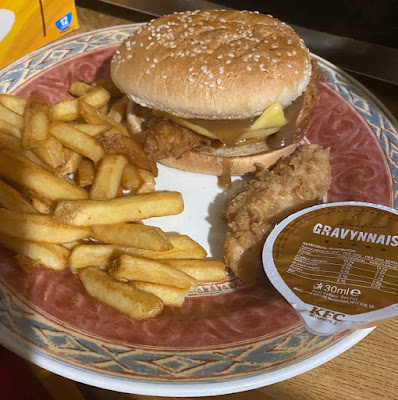 McDonald's
For Christmas 2020, McDonald's went to old reliable. And doubled it.
The most popular burger from the most popular fast food restaurant is the Big Mac. It's a burger that contains two beef patties, a slice of cheese, lettuce, onion and pickles. As well as that, it has the infamous 'Big Mac Sauce'.
McDonald's Double Big Mac adds an extra two patties to the burger. 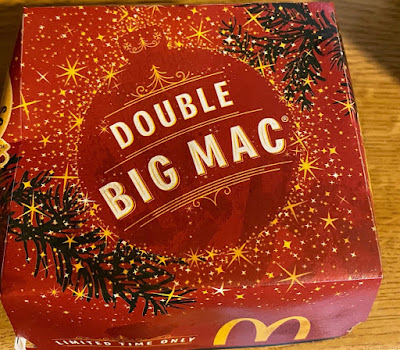 The burger arrived in a Christmassy box. However, it was all downhill from there. 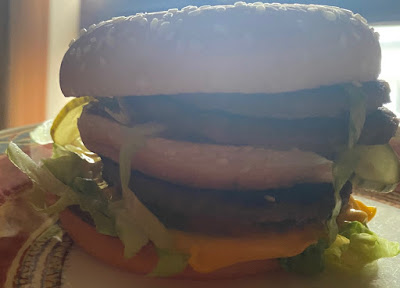 I have often joked that everything looks better in a restaurant window. This certainly was the case with the burger that arrived at my door.
As soon as I began to eat it, the burger started to fall apart.
The Big Mac is not my go to burger, whenever I buy food from McDonald's. I always find myself struggling to finish burgers with more than one patty in (see the Burger King item above), so it was not surprising to me to tap out before I could finish the Double Big Mac.
It was a complete mess at the end. 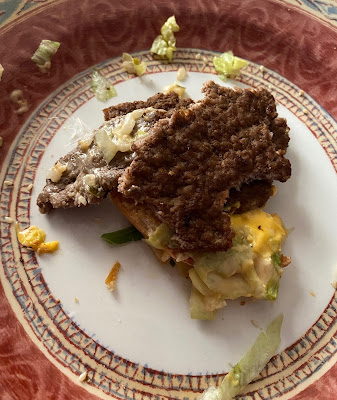 And The Winner Is....
KFC easily won the three-way battle.
I struggled with Burger King's offering and couldn't finish the mess from McDonald's.
KFC also scores highly on novelty. Burger King came close using the 'Five Gold Rings' theme. There is nothing festive about McDonald's Double Big Mac other than the box it came in.
Posted by David Taylor at 12:00 AM