In 2019, Cadbury brought out a limited edition of its Twirl chocolate bar. It turned out to be a huge hit by selling out everywhere.
The company decided to bring back the Twirl Orange - once again for a limited period - this autumn and did so with an online promotion last week.
Cadbury's Twitter account set up a couple of presale events last week. It allowed 10,000 people to nab an early bar for 69p.
I gave it a go on the second day.
What I had to do was tweet the Cadbury account using the hashtag 'TwirlOrangePresale' after 12PM on the Thursday. I then had to hope that my tweet was in the first five thousand.
After posting my tweet a minute after midday, I received a reply ten minutes later. It informed me that I was 3,371st in the queue. All I had to do was wait. 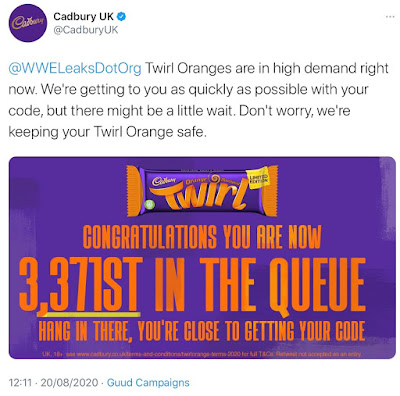 It was then a waiting game.
At 3:03PM, I received a second reply. This time, it gave me a code and a link that allowed me to go onto the Cadbury website, buy ONE bar for 69p and get free delivery.

I did what was asked of me.
On Monday morning, a shiny orange envelope landed on my doormat. I knew what it was, but I didn't know what else was inside. 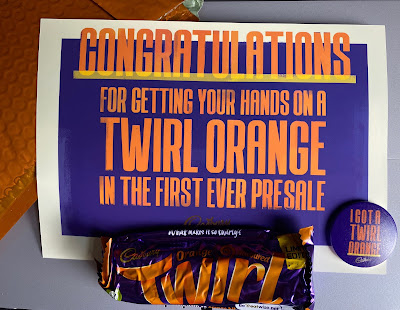 Not only did I get the chocolate bar. I also had a badge which read 'I Got A Twirl Orange' and a certificate which - on the front - read 'Congratulations For Getting Your Hands On A Twirl Orange In The First Ever Presale'.
The back of the certificate claims that my bar was the 1,120th out of the 10,000 that were given away in the promotion.
When I saw the number, I immediately thought that it didn't make sense considering I took part in day two. Therefore, five thousand bars should have already been given away by then. Add in the fact that I was the 3,371st person in the queue on Thursday, my guess is I should have had bar number 8,371 out of 10,000.
Then it dawned on me. Some people might have queued up on the two days and still haven't purchased their bar. Therefore, I jumped ahead of them.
Still - considering how many people were ahead of me, it still seems odd that I ended up with the 1,120th bar.
Not that I'm complaining. 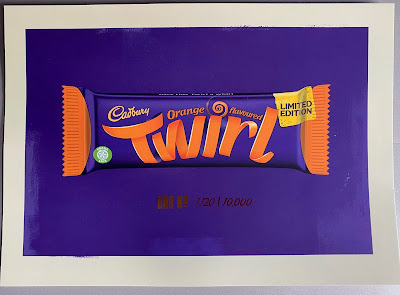 As for the bar itself - I enjoyed my portion. My nephew liked his.
I like orange chocolate. I don't usually go out of my way to eat Twirl bars, but I found
The bars will arrive in shops sometime in mid-September. It'll be interesting to see if the demand is as intense as it was last year.
Posted by David Taylor at 12:00 AM