Be Wary Of Fake Netflix Emails And Texts

I'm getting a worrying amount of fraudulent contact from people claiming to be from Netflix.

For example, here are some of the emails that landed in my inbox last week. 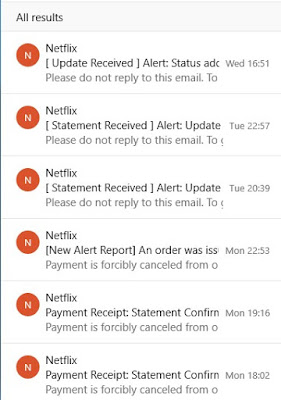 I opened one of the emails just to see what the content looks like. I suppose there is a good chance that there are people out there who would fall for this.
People who are clued in on what to look out for in fake emails such as this will obviously know what it is. However, for those who aren't as savvy, this might be trouble. 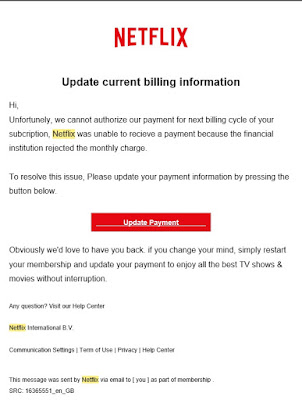 I would surmise that it's a way to get your payment details. Or, failing that, at least your Netflix login credentials. I don't know anything about it, but I would not be surprised if there is a black market somewhere in the deep, dark web which sells Netflix information.
To further my concern over how these fake Netflix have began to pop up in my mail's inbox, I was surprised to see a text message from 'Netflix' informing me, once again, that they were unable to charge me for month. I was then asked to complete a form. I obviously didn't click on the link that it wanted me to access. However, I did a WHOIS search for the website and it is apparently based in Malaysia.
I called a number to try and report the URL, but it turned into a game of 'sorry?' because they couldn't understand me. 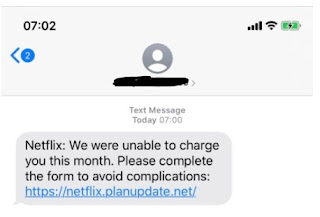