Friday The 13th: Then And Now

It has been written many times on this blog over the years, but I will state it once more.

When I was a child, I was a Freddy Krueger guy.

I loved the A Nightmare on Elm Street film series. I wasn't that much of a fan of the Friday the 13th movies, but I watched a few of them.

What I did like, however, was the Friday the 13th computer game for my Commodore 64. I'd guess the main reason why is because - as far as I was aware - there wasn't a Nightmare on Elm Street Commodore game.

It was only within the last year that I found out there was an actual Commodore game for Nightmare, but let's forget about that for now. Friday the 13th - for young me - was the only option for a horror movie video game tie-in.

Below are some images I've captured from the game. 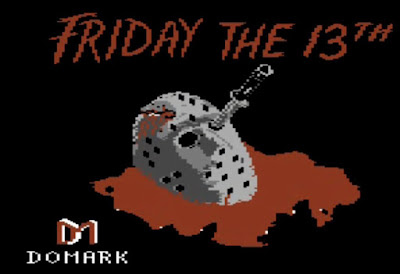 Above is the intro screen to the game. You'll notice that the company that made it was Domark.

Fans of the movies will recognise that the hockey mask with dagger in the eye image is from the cover of the fourth movie in the franchise - Friday the 13th: The Final Chapter.

Eight more movies came after that one, so that was false advertising if ever I saw it.

In the movies, Jason Vorhees (or his mother if we're talking about the first instalment) stalks the campers of Crystal Lake with the intent of murder.

The game has the same premise. You play the role of one of ten campers and have to navigate your way around the camp trying to find Jason before he kills you and your fellow campers. 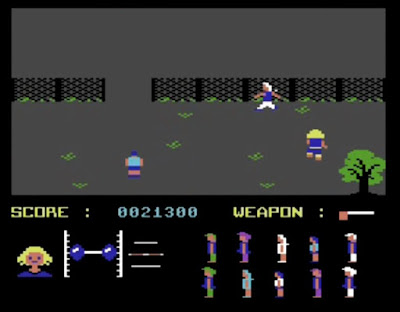 Here's an example of the main game. There are three characters in the image. The one with the blonde hair and blue clothes is the player.

You'll notice that the player has a weapon that can be used on Jason. 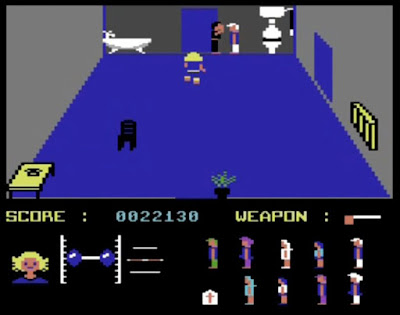 The thing is, Jason can disguise himself as one of the campers so you can walk around from screen to screen - see fellow campers - and not know for sure it is your nemesis or not until his clothes change to black.

What you had to do was walk beside the character and just use your weapon once. If  it's him, his costume would turn black and then you'd have to try and hit him enough times to win the game.

As you can see in the third image above, Jason is beside the door and about to do away with the camper with white hair. He has already killed one of the campers as the gravestone indicates on the character screen above.

The thing that always makes me laugh about Jason walking around in the black costume is he doesn't look THAT much like the Jason in the movies. You don't see a mask. To me, he looked more like John Kreese - the bad guy from the Karate Kid movies.

Yesterday wasn't just a trip down memory lane in regards to the Commodore 64 Friday the 13th game.

In December of last year, I was looking for Nintendo games to buy my nephew and I stumbled across a title in the sale that caught my attention. 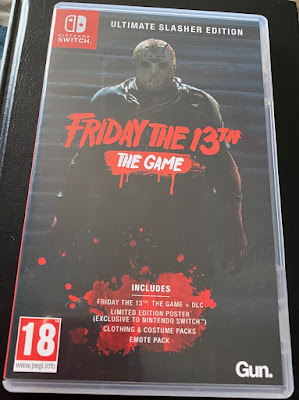 Yes, it was 'Friday the 13th: The Game' for the Nintendo Switch.

I didn't think twice, I bought it immediately. And then, when it arrived, other things got in the way that prevented me from having free time to play it. I then decided I would wait for a particular day to open up the game for the first time.

Friday the 13th of March.

I opened up the game yesterday afternoon and had one game just to try it out.

Instead of reading the in-game instructions, I went at it right away and inserted myself in an online game. 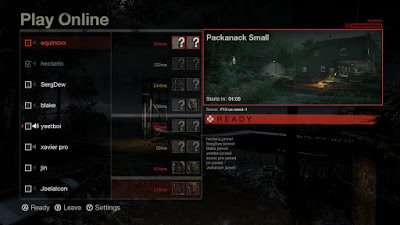 My game started off on the campsite (I think) and I found myself walking around before I arrived at a cabin. I entered the building and walked around. Then, I came across a car battery. It looked like I needed to bring that with me wherever I was going, so picked it up.

Once outside, I used the compass that was pointing me in the direction of the car.

I had the battery, so I obviously needed to insert it in the front part of the car. I couldn't. I kept pressing the buttons to try and place it inside, but the battery would still be in my hand after I thought I had achieved the little task.

Oh, and what I also forgot to add is that - for some reason that I have no idea about - my character was a female.

After trying and trying to get the battery inserted into the car's engine, a couple of the other online players arrived on the scene.

Let's just state this: I would have preferred Jason to have popped up at this point because both of these players had their microphones on. They sounded underage for an eighteen game (yes, I know how much of a contradiction that comes across when you consider I was playing the Commodore game at a young age) and the one boy was - and I swear on my life - almost crying  when I couldn't get the battery in the engine.

I tried to hand the battery over, but no luck.

So, I did what any sane adult would do - I exited the game.

I'll play it again in the very near future. When I do, I'll read the instructions beforehand just so I can get a better grasp at the game, and hopefully less of a grasp of the car battery.

I didn't get to be chased by Jason, However, the intro part of the game did have him in it. He looks just as menacing as he does in the movies. 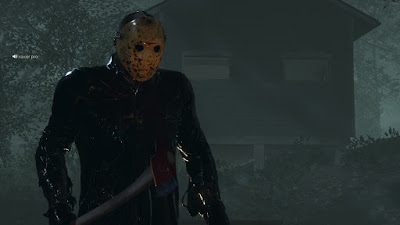 He also doesn't look anything like a Cobra Kai instructor, which is a lot better than I can say for the Jason Vorhees in the Commodore game.
Posted by David Taylor at 12:00 AM