I came across some images of the new Star Wars movie today that made me go 'Okay, they look bad ass'.

They're of the new Sith Troopers. They're kind of like clone troopers but, instead of having white/blue design, they're red and black.

Definitely imperial colours when you consider that Emperor Palpatine - who was last seen dying in Return of the Jedi (well, if you want to play gotcha - he was last seen in Revenge of the Sith in the prequel trilogy!) - is making a comeback in the new movie. Palpatine's guards in ROTJ wore red and black.

Anyway, they look great. Here's a pic just to let you see for yourself. 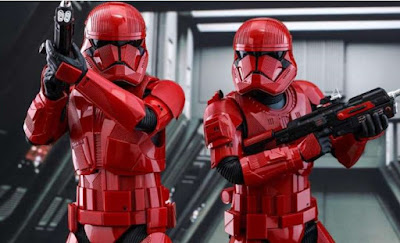