Here is a burger that will be sold at Chase Field on Sunday. 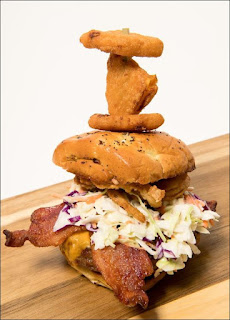 It's called a 'Royal Rumble Burger' because the venue is where this year's Rumble is taking place.

The things on top of the bun are fried mac and cheese wedges.

My opinion - it looks insane, but it's the kind of thing I'd try just to say I've done it!
Posted by David Taylor at 12:42 PM