Leon White, who was best known under the wrestling moniker of Vader, passed away on Monday night.

White had been in poor health for years and has had recent surgeries on, what I believe, was his heart. 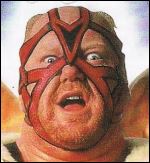 When somebody from professional wrestling passes away, I like to write about something from their career that I'll remember.

I have far too many to write about Vader because he was a major part of the industry during the time when I was building a knowledge of the business.

He was the champion of World Championship Wrestling during most of my favourite years of following the company (the early-to-mid 1990s) and defending the strap in the main event of the first American wrestling show I went to.

The twenty-fifth anniversary of that show is coming up later this year, but I wrote about it in 2013 if you'd like to read it.

He wrestled 'The British Bulldog' Davey Boy Smith in the match. So, this obviously means both of the main eventers have now passed.

Vader was amazing in his role as the monster heel during those years. Unfortunately, his time at the top was compromised when Hulk Hogan signed for WCW in the summer of 1994.

When Vader was announced as a participant for the battle royal, I was so excited to see him coming in. I truly thought he would flourish in the WWF but it didn't pan out as well as I had expected.

He had only a small handful of great bouts in the company before departing and heading back to Japan where he was already an established name.

I might spend the evening watching some Vader matches now!
Posted by David Taylor at 5:20 PM