Georgia Dome On My Mind

While reading the news yesterday afternoon, I found myself coming across a story about Atlanta's Georgia Dome being demolished.

The building was reduced to rubble after an orchestrated implosion yesterday morning.

I've never been there, but I do have some thoughts on the venue.

Growing up as a wrestling fan, I used to love watching the major shows in big domes or stadiums. For example, there was WrestleMania III from Detroit's Pontiac Silverdome (coincidentally, this building is due to be demolished as well, if I recall correctly), Toronto Skydome for WrestleMania VI, Indianapolis' Hoosier Dome for Mania VIII (has been demolished).

While I'm throwing out stadiums and domes, I may as well point to SummerSlam 1992 which was held from Wembley Stadium. Yet another than has been knocked down. 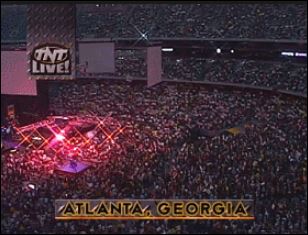 Notice how all these memories are of big venues for big events? Well, imagine how much I enjoyed watching the Georgia Dome play host to episodes of World Championship Wrestling's Monday Nitro back in the 1990s.

The Georgia Dome has hosted many sporting events since opening for the 1996 Atlanta Games, but what I'll remember it the best for is the Nitro in the summer of 1998 when Bill Goldberg defeated Hulk Hogan to become WCW Champion.

It was only a few months into Goldberg's run. He was undefeated and was a rising star at the time. Hogan - noticing how hot Goldberg was getting - allowed the company to put the strap on the newcomer for the first time. It wasn't a good deed by the Hulkster, though. His ulterior motive was to be the guy who ended the streak and get his championship back in the long run.

The story didn't go that way, though.

Goldberg lost the title to Kevin Nash in the main event of WCW Starrcade 1998. Then, a few days after that  - on January 4th 1999 - during an episode of WCW Nitro, Hogan once again became WCW Champion after he and Nash did what is now regarded as 'The Fingerpoke of Doom'.

To start the match, Hogan poked Nash's shoulder, Nash then did a pratfall and The Hulkster covered the champion for the three count.

Hogan and Nash then reformed the New World Order faction after their shenanigans.

Many thought this was one of the things that turned fans off WCW Wrestling.

Why am I going off on a tangent? Well, guess which building was the venue for this particular episode of Nitro?

Despite hosting the best and worst of World Championship Wrestling, the building was packed and it made for a cool visual seeing fans jampacked in there for a Monday night show.
Posted by David Taylor at 6:00 AM