I Finally Own A Super NES Classic Mini

If you read the post I published on Wednesday June 28th of this year, you'll remember that I pre-ordered a Super Nintendo Classic Mini.

Well, look what was delivered yesterday: 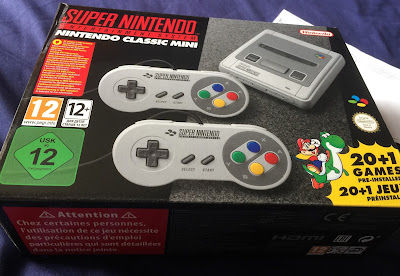 Yes, after all the hassle I went through trying to place the order back in June - and the thought in the back of my head that I'd get an email in the days leading up to the official release informing me that my order couldn't be completed due to lack of stock - I did get one.

As I've written MANY times in the past - the Super Nintendo is my favourite games console of all time. I could not let this item pass me by.

I first had a Super NES twenty-five years ago so it was really cool to get hold of this. And when I say 'get hold of this' I mean GET HOLD OF THIS. Look how small it is: 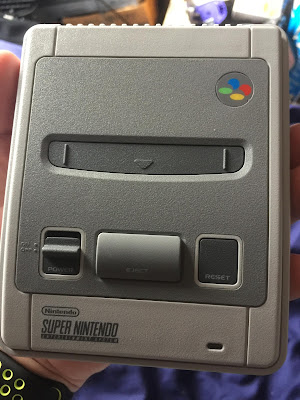 It's small enough to fit in the palm of your hand and is packed with a bunch of classic games that were available on the Super NES back in the day.

To be honest, I have only had a play of a few games since opening the box and hooking the device to my TV.

I've played a bit of Super Mario World because it was the first game that I ever owned on the original console.

The game that I spent the most amount of time playing yesterday afternoon was the version of Street Fighter II that is featured on it. It's the Turbo Edition that I didn't really bother getting into when it was first out in 1993ish. I had bought the original version of Street Fighter II a year earlier (maybe around twenty-five years ago to this very day if my calculations are correct!) and spent sixty-five pounds on it which still, to this very day, makes me shake my head considering the games were in the £39.99 to £44.99 range back then.

Leaving the Street Fighter II story for another time..

Another game I spent a few minutes on was F-Zero. As funny as this might seem, it was the first time I had ever played it.

F-Zero was one of the first games that came out when the system launched over here in the spring of '92 and is a futuristic car racer. It never appealed to me. One thing I noticed from playing it is the graphics aren't that great. I know we're talking about a game from all those years ago, but I could have sworn the screenshots I saw of it back in the day looked better.

One thing I noticed from looking through all the games is that some of the games I didn't recall, or had played before, were from around 1994. I guess you can pinpoint '94 as being the year that I started to move away from video games before landing back in for the Nintendo 64 three years later.

I think I'll have a lot more to write about the Super NES over the coming weeks. This nostalgia trip has only just begun.
Posted by David Taylor at 10:00 AM