It was quite a pain in the ass trying to preorder a Super Nintendo Classic.

I published  a post about the mini console yesterday. However, the post was written early on Monday evening with it scheduled to go live on Tuesday. The fun began after that.

After scheduling what I wrote to go live at 7am the following morning, I decided to check out the Game website to see if the company had the item on-site.

I added the item to my shopping basket but could not get to the checkout. I kept trying and trying.

At one point, I had the laptop, iPad and iPhone all trying to access the Game website. It was not working well at all.

It ended up with the site going down due to maintenance.

In the meantime, I checked Amazon and the Official Nintendo Store. Neither website had the item available for sale. It was Game or nothing.

And Game meant nothing with the site not working out.

I still kept trying the Game site and then - a couple of hours after initially finding the item was available - I was able to place my order.

I can't shake off the feeling that I'm going to end up disappointed, though. I'll worry about that when the day comes.

By the way, the Official Nintendo Store started to take orders yesterday afternoon. I checked in and the site was slow and couldn't get to the sale page. I returned shortly afterwards and was finally able to view the page. 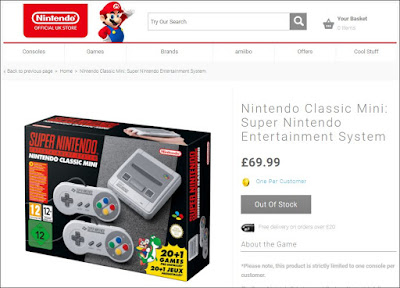 As you can see, it's out of stock there as well. It was also ten pounds cheaper than what I am expecting to pay if/when I am charged when Game is about to ship the parcel. Unless, of course, there's some sort of price guarantee.
Posted by David Taylor at 7:00 AM