It had been a few years since I last saw a Super Mario Bros. Easter egg, but they made a comeback in 2017... 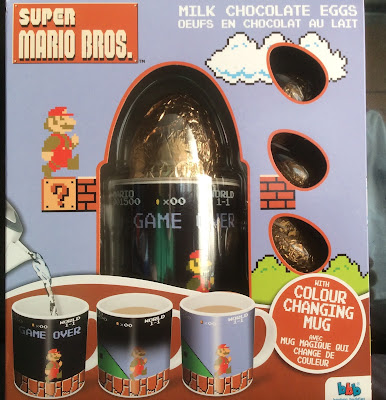 So, it has been three years since they were last around.

The latest egg once again has - or should that be 'had' now that Easter is over? - a mug just like in 2014. This one, however, is a heat changing mug that has a black background when it's in normal temperature, but changes to sky blue when hot liquid is poured in.

There was one large egg and three smaller eggs inside along with the aforementioned mug.

They've also gone old school. The image is taken from the original Super Mario Bros. game. The previous two eggs were from the modern versions of the franchise.
Posted by David Taylor at 12:00 AM